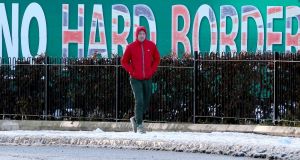 A billboard in west Belfast. The British are still hoping that a close trading agreement on a permanent trading relationship between the EU and the UK can avoid a hard border. Photograph: AFP/Getty Images

If Britain’s rejection of the European Union’s draft Brexit treaty last month was them storming off the pitch after a perceived unfair tackle, the latest agreement should be seen as both sides returning to the field of play.

The EU side, including the Irish, were puzzled by London’s response to the draft withdrawal text late last month given that it simply put into legal wording the political deal to which the UK agreed in December.

That deal was designed to set out ways to avoid the return of a hard Irish border and included a default position: Northern Ireland would remain within the EU’s economic sphere in the absence of a wider EU-UK trading agreement dealing with the Border or a specific solution from the British.

Negotiations appeared stuck following the strong rhetoric from British prime minister Theresa May and the pro-Brexiteers at Westminster over that wording.

Monday’s agreement on the 21-month post-Brexit transition period and the UK agreeing (again) to the backstop arrangement should therefore be taken as positive developments.

The EU’s chief Brexit negotiator, Michel Barnier, praised the agreement on the transition period and the Border as “a decisive step” but was equally cautious, warning that it was “not the end of the road”.

In reality, all sides can claim wins here: the British have their “implementation” period to reassure businesses that were fearful of a “cliff-edge” disorderly Brexit when the UK leaves the EU in March 2019, while the Irish can be happy that the British have not reneged on the default position to maintain an open Border in Ireland.

Dublin will certainly take the British renewed commitment to the third-option “backstop” position – effectively maintaining the island of Ireland as a single unit under the EU laws and regulations – as progress.

The strength of the language used by the UK’s Brexit secretary David Davis on the December agreement will assure Tánaiste Simon Coveney and his Brexit team at the Department of Foreign Affairs.

“Make no mistake,” said Davis, both the UK and the EU are committed to that agreement “in its entirety” and on the need “to include legal text detailing the backstop solution” for the Border within the withdrawal agreement, though with the condition that it is “acceptable to both sides”.

The British are still hoping that a close trading agreement on a permanent trading relationship between the EU and the UK can avoid a hard border, and Davis expressed this view again standing next to Barnier in Brussels on Monday.

The intention to “achieve a partnership that is so close as to not require specific measures in relation to Northern Ireland” repeats again everyone’s preferred option: a future EU-UK trade deal. That would avoid the need for the emergency backstop option, though everyone is in agreement again that such an option is required.

Nothing should upset Dublin here. The Irish will be happy to see the British escape the bottleneck created after the EU published the draft text and restart the journey again towards options A (a trade deal) or B (a specific solution for Northern Ireland) so long as option C (the backstop) is set in concrete.

Monday’s agreement, grounding option C as the default “unless and until another solution is found” gives both sides the wording they need to take back to present to their respective sides.

This is important for May, who will have to reassure the DUP that the renewed commitment to the north-south backstop does not mean an east-west weakening between Northern Ireland and the rest of the UK.

Barnier’s “nothing is agreed until everything is agreed” conditional attachment in the draft guidelines for future negotiations to be put to EU leaders later this week at the European Council gives the Irish even more cover to safeguard the backstop.

The far bigger issue now is that nobody still has any idea of how to avoid a hard border and the British recognise that, as Davis put it, there is “as yet no agreement on the right operational approach.”

“We know what we need to do and we’re going to get on with it,” he said.

That will require, as it did before Monday’s agreement, more detailed proposals from British so the latest deal sheds no new light on how the Border can remain an invisible frontier after the UK quits the EU.

But at least play can resume again.