Decency survived despite the barbarity 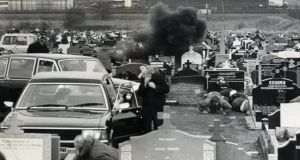 Above all I remember the sense that anything might happen. We had suddenly, shockingly come to a place where norms – for even sectarian warfare in the North had its ‘norms’ – had been abandoned. If a funeral could be attacked what next? To borrow Seamus Heaney’s phrase, the war had by then established its “customary rhythms”. After nearly 20 years of violence we could still be outraged but all within a template of what had become, perversely, routine atrocities: the part-time UDR man shot at his front door; the father of four killed for being a Catholic; the army patrol blown up in south Armagh; the unarmed teenager shot by the army on the Border. There was killing, condemnation and killing.

In retrospect the Remembrance Day bombing in Enniskillen should have warned us against complacency about the “acceptable level of violence”. Vengeance for that extraordinary act of mass murder would help inspire the terror of those terrible days of March 1988 which began with the shootings in Gibraltar and ended with the deaths of corporals Wood and Howes.

I was on the Border when the Gibraltar dead came back. The cortege moved in silence across the great division. When I asked some women for their thoughts they turned on me. I was working for RTÉ, in their mind the broadcasting wing of the Free State that had abandoned them to Orange domination back in the 1920s.

Such was the temper of the times. The deaths of Mairéad Farrell, Seán Savage and Danny McCann occurred in an angry, alienated vacuum. Politics was a dialogue of the deaf between unionism and moderate nationalism. The paramilitaries and the security forces fought each other in city and countryside. Nobody won. Nobody held out hope.

On the day of the Milltown funerals I was assigned to duty in the RTÉ office on Royal Victoria Street. Other colleagues were on the ground following the cortege. From the office we had a good view across the city towards Divis Mountain and west Belfast beneath. On rioting days we could follow the direction of trouble from the smoke rising in the distance. There was a radio in our office and one of my duties was to liaise with our crews in the field.

I will always remember the voice of the late and much-loved Gerry O’Brien – RTÉ’s lighting man in Belfast – coming in fragments over the radio. Something very bad was happening at the funeral. There was shooting. Total chaos. My first thought was for my wife, Anne Flaherty, who was covering the funeral for the Irish Press. I was safe in the office. She was in the line of fire.

Later I found out that Anne had been standing near Gerry Adams and other Sinn Féin leaders and hearing the shots assumed that it was an IRA volley. Seeing Adams duck she took cover behind some headstones. Back in the office I had no idea what was happening until eventually word came back. Gerry O’Brien had found Anne and told her: “Your man is mad with worry.” She called to say she was safe. Like the other reporters present that day she composed herself and got back on the job. Anne was present in Andersonstown a few days later in the aftermath of the killings of corporals Howes and Wood.

I remember my pride in my colleague Gary Honeyford who was present at Milltown and that night produced a stark, meticulously fair and factual account of what had taken place. In a time of passionate feelings he did his duty as an honest witness. Older hands such as Gerry O’Brien told me the atmosphere took them back to the bad days of the early 1970s. Gibraltar. Milltown. Andersonstown. It was as if all the poison of the last two decades had sprung to the surface from a submerged well.

We stayed at home at nights. We waited for news of fresh horrors.

More troops were brought in. Police reinforcements were sent to the most vulnerable flashpoints. But slowly a kind of calm returned. The people of Belfast did not turn on each other in sectarian madness. Sure the war did not stop. But there was no descent into communal bloodletting. If ever there was a moment when that might have happened during my five years in Belfast this was it. But something deeper prevailed. The old cliché that most people wanted peace proved itself true. It wasn’t just the presence of the army and police that stopped tribal warfare.

My friend Michael Longley, poet and conscience of his time, talks about civilisation being made up of the gestures of all those who refuse to hate and who work with each other in the small daily tasks of living. I wish I had understood the true significance of the moment then. It was not the horror but rather the decency that survived in spite of it all. It was that spirit of the truly civilised which led from the grim days of March 1988 to the peace which, however falteringly, endures to this day.