Brexit analysis: Deal is a holding of the line for Ireland 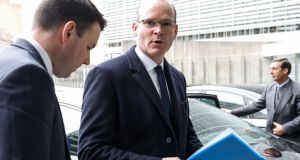 A case of two steps forward, and one backwards. But progress nonetheless, inasmuch as political commitments are being turned into legal obligations.

When EU negotiators signed off in December on the joint report that was supposed to wrap up the phase one talks on UK withdrawal they included a “no backsliding” clause. This made it clear that progress in other areas of the negotiations would be dependent on copperfastening in legal language what had already been agreed.

There was, they argued, no point in having to renegotiate again and again on issues that had already been resolved.

In putting into legal language the Border commitments those same negotiators, the UK argues, failed to reflect in full – or even in its nuance – the December report.

The Irish “backstop” protocol, they claimed, reflected only one of the options for the Border, and at that the least preferred one, namely the fallback.

The European Commission argued that it was the only option that was remotely concrete, saying the other two were tentative and aspirational, and not suitable for treaty language.

When the EU task force put the backstop into legal language they reflected the widely-held view that it was impossible to “operationalise” without leaving Northern Ireland in the customs union with all that would entail, including borders down the Irish Sea and other problems.

So when we came to trying to get agreement on the Withdrawal Agreement, we were inevitably back in renegotiation territory.

In this case, while it is agreeing the “principle” of a backstop, the UK government is saying it simply cannot agree the version that the task force came up with. So on Monday they kicked that particular can down the road.

The treaty text preamble tells us that “With respect to the draft protocol on Ireland/Northern Ireland, the negotiators agree that a legally operative version of the ‘backstop’ solution for the border ... should be agreed as part of the legal text of the Withdrawal Agreement, to apply unless and until another solution is found.”

Note “a”, not “the”, legally operative version. This is a huge difference.

Thus we now return to the status quo, pre-Withdrawal Agreement treaty text, and the “fudge” that was December’s agreement, a formula based on an unwillingness to reconcile the unreconcilable elements of the UK’s Brexit red lines.

So Monday’s deal is not in effect a diplomatic triumph for Ireland, but rather a holding of the line, back where the line was in December.

Importantly, the UK remains bound to what Tánaiste and Minister for Foreign Affairs Simon Coveney calls “our insurance policy” of a fallback position, a Northern Ireland which will maintain regulatory alignment with the Republic, however that is done, should a better option not become available.

And London can say to the DUP that it is still holding the line against a border in the Irish Sea.

For the time being at least.