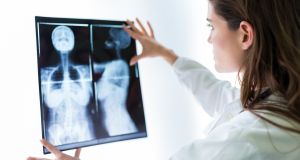 Lead researcher: “We hope that, if successful in further testing, our research may one day allow doctors to give women more tailored and effective treatments.” File photograph: Getty Images

Researchers in Ireland have developed a mathematical formula that may help doctors predict how effective chemotherapy will be in treating aggressive forms of breast cancer.

Recent research from the Royal College of Surgeons in Ireland (RCSI) examined how effective chemotherapy was in treating triple-negative breast cancer.

The study looked at how triple-negative breast cancer cells responded to chemotherapy, and found patients may respond better to drugs currently being used to treat some leukaemia patients, called BCL2 inhibitors.

Dr Robert O’Connor, head of cancer research at the Irish Cancer Society, cautioned it would potentially be years before the results of the study led to improvements for cancer patients.

“This research is in quite early stages and it will be many more years until any potential benefits reach cancer patients” he said.

“It does show the building blocks required to lay the foundations for life-saving cancer research. The more we understand this disease, the better chance we have of stopping it in its tracks” he added.

The research, carried out by Federico Lucantoni, was published in the cell and disease Nature journal, and funded by the Irish Cancer Society.

In Ireland more than 250 people are diagnosed each year with triple-negative breast cancer, which is aggressive, affects mainly young women and is considered difficult to treat.

Jochen Prehn, RCSI professor of physiology who supervised the study, said at the moment the only treatment option for triple-negative breast cancer patients was chemotherapy.

“While this will work well for some patients, others may find that their cancer cells don’t respond as well as might be hoped to chemo,” said Prof Prehn.

“We hope that, if successful in further testing, our research may one day allow doctors to give women more tailored and effective treatments and spare the harsh side effects of chemotherapy in women who are unlikely to respond well to it” he said.