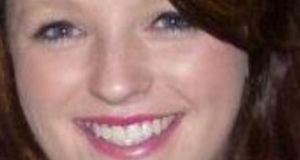 Keady Clifford (29), originally from Emlough in Dingle, Co Kerry but living at Broomfield in Midleton was pronounced dead at the scene of the single vehicle crash on the N25.

Tributes have been paid to a young nurse who was fatally injured when her car left the road and crashed near Midleton in Co Cork early on Tuesday morning.

Keady Clifford (29), originally from Emlough in Dingle, Co Kerry but living at Broomfield in Midleton was pronounced dead at the scene of the single vehicle crash on the N25.

The crash happened at around 8.25am as Ms Clifford was driving home after completing a night shift at Cork University Hospital where she worked as a nurse.

Gardaí said her blue Ford Fiesta left the road and collided with a wall and a tree on the dual carriageway just after the Water Rock junction on the western side of Midleton.

Ms Clifford is survived by her parents, Artie and Linda who were holidaying in Lanzarote at the time and flew home after they were informed of the tragedy.

The family are well known in the area and Mr Clifford is chairman of Blas na hÉireann Food Awards which he founded and which are held annually in conjunction with the Dingle Food Festival.

Local Fine Gael councillor in Dingle, Seamus Cosai Fitzgerald said the news of the tragedy had been greeted with great sadness.

“There was great shock and sadness when we heard the news yesterday morning and our thoughts are with the Clifford family at this tough time - it’s a desperate tragedy for any family to face.”

A keen basketball player while attending Presentation Secondary School in Dingle, the late Ms Clifford maintained her interest in the sport when she moved to Cork playing with Glanmire.

Glanmire Ladies Basketball Club posted a message of sympathy on their Facebook page as they paid tribute to their former player.

“Unfortunately we have been told of the passing of our friend Keady Clifford. “Keady played with Glanmire for a number of years while studying and working in Cork,” said the club

“Keady was dedicated, lovable and adored by friends, coaches and players and will be truly missed. We extend our deepest of sympathy to Keady’s family, friends and work mates at this very sad time.”

Gardaí have appealed to anyone who may have been travelling on the N25 between 8.15am and 8.30am and witnessed the crash to contact them at Midleton Garda Station on 021-4621550.

One line of inquiry which gardaí are exploring is that Ms Clifford may have fallen asleep and lost control of the car as she was driving home after completing a night shift.

Ms Clifford’s death is the third fatality on Cork roads this year and follows the death of a 73-year-old pedestrian in Clonakilty on January 15th and an 84-year-old motorist near Midleton on January 22nd.