Call for smartphone use to be banned for primary students 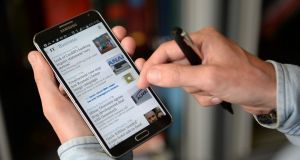 Concern over the safety of children online has prompted a call for a smartphone ban in schools. Photograph: Dara Mac Donaill

Primary teachers have played down calls for a ban on smartphones in schools on the basis that most have long-standing policies which prohibit mobile phone use.

There has been rising concern over the safety of children online following a number of cases where young girls have been coerced online to share graphic pictures of themselves.

While some principals have called for smartphones to be banned at primary level, the Irish National Teachers’ Organisation said most schools have long-standing policies in place to stop mobile phone use in schools.

“Most primary schools today insist that pupils’ mobile phones are left at home,” INTO spokesman Peter Mullan said. “Where parents provide a reason for having a phone in school, polices require the phones to be handed into the school office during the day or that phones be turned off during the school day. In general, schools report a high degree of compliance with such policies.”

Ultan Mac Mathúna, principal of Holy Cross in Dundrum, Dublin, said his school’s policy on mobile phones – introduced about seven years ago – has won the acceptance of children and parents.

“It’s a simple policy: they’re not allowed to use them in school. We ask that they switch them off when they arrive,” he said. “If it goes off in class, the teacher takes the phone and they put a note in their homework journal, and it’s handed back later. If it happens a second time, parents are required to come in and collect it.”

Calls for a ban on smartphone use have been prompted partly by plans by the French government to prohibit students up to the age of 15 from using mobile phones in schools. The measure is due to come into effect from September.

Dr Mary Aiken, an academic adviser to Europol’s European Cyber Crime Centre, has also expressed support for such measures and called on the Department of Education to introduce guidelines.

The department, however, said calls to ban smartphones in schools are matters for individual boards of management.

A department spokeswoman said it took the issue of internet safety “extremely seriously” and that all schools were advised to have an “acceptable usage policy” over students’ use of the internet.

At second level, do we really want to introduce bans or rules that we can’t implement?

The National Association of Principals and Deputy Principals, which represents second-level school leaders, said it recommended policies governing the use of smartphones rather than an outright ban.

The association’s director, Clive Byrne, said many classes have a “bring your own device” policy, to allow students use smartphones and iPads for educational purposes.

“With the rollout of the digital strategy in schools, it would seem hypocritical on the one hand to seek the use of them as resources and, on the other, to ban them,” he said.

A more sensible approach, he said, was to adopt policies over the responsible use of devices. “At second level, do we really want to introduce bans or rules that we can’t implement? I think responsible use of them is a better way to go rather than outright banning of them.”