Housing crisis has led to a surge in illicit rentals, some run by a firm with links to language schools 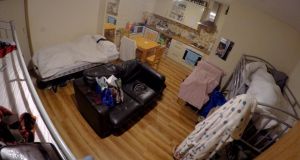 One property advertised in an online group, for five tenants who would sleep in the same room as the kitchen and living area.

An unofficial rental black market of overcrowded properties is thriving in Dublin due to the shortage of affordable rental accommodation.

In such a market, overcrowded bunk-bed accommodation, no official contracts, and rent in cash only is the norm, with tenants predominantly from Brazil and Latin America. The vacancies are advertised in private Facebook groups, and some properties are run by a travel agency firm that works with several English language schools.

Rents range from €300-€400 a month in most cases, which will get you a bunk on a bunk bed in a single room that can have between three and five other people sleeping in it. Flats and houses can have between 11 and 14 or more people staying in them.

The Irish Times spoke to a number of tenants, mainly English language students from Brazil, unofficially renting under the radar. Tenants only get their deposit back if they find a replacement, who pays their deposit to the outgoing tenant. This means renters are responsible for advertising vacancies and organising viewings. In most cases properties are advertised in private Facebook groups without the address.

Henrique Lima (26) moved to Ireland in August from Brazil to study in an English language college. He has just moved out of a first-floor flat at 31-32 Cumberland Street North, Dublin 1, which he shared with 10 people.

He had a bunk in a small room that had two bunk beds, two wardrobes, and little room for anything else. The rent was about €300, no contract, and he said the property was considered good compared to some accommodation he had seen.

“We came to Europe for opportunity but we found opportunism,” he said. Lima said sharing a small room with three other men was difficult, and previously a man working as a kitchen porter was renting a bunk in the room. “I was sleeping at 5 in the morning and he was coming in, making noise, changing,” he said.

“It’s just tight because there’s no space for you; it’s sick, it’s totally sick.” But he added the price of an individual room in the ordinary rental market was simply out of many foreign students’ budgets.

The landlord, Riccardo Acchione, lives in the flat and sleeps in a double bed with his partner, but has added a bunk bed into his own room as well to rent out. Acchione said he had not received any complaints from tenants about the accommodation.

“I can’t guess what is good for them or what is not,” he said.

Acchione said he did not see “any problem” with putting tenants in his own bedroom. He said it was “not crowded for me, if someone doesn’t like [it they] just need to tell me, as good landlord who I am I will help tenants.”

Dilane Kucun (24) recently moved back to France and had been renting a bunk in a room with three other people. The address of the house was 9 Ravensdale Park in Kimmage, Dublin 12, with 14 tenants living there. The property was rented and run by a travel agency, Vida de Intercambista, that recruits students from Brazil for English language schools in Ireland. The company also managed a second property that it rented to students near Cork Street until recently.

Kucun said they did not have enough space for their belongings and “in the morning it was very difficult to get ready”. The rent was €290 a month, cash and no contract.

“In the house they have a rat because they have a garbage problem,” Kucun said, as the bins regularly overflow each week before being collected. She said there were five bedrooms in the house, and just two bathrooms, one of which she said was in poor condition. You “don’t have any privacy”, she said. The tenancy is officially registered with the Residential Tenancies Board (RTB).

The travel agency partner with a number of English language schools, which use the company to recruit students from Latin America, including Citas College on Foley Street, Liffey College on Francis Street, and Ibat College Dublin.

Liffey College said the agency “sends us students occasionally and works on a commission”. One deal advertised by the agency includes a 25-week English language course, a flight to Dublin, and two weeks’ accommodation for €2,686.

Guilherme Dias Teixeira (34), the director of the agency in Ireland, who is originally from Brazil, said the company only recently began providing accommodation as part of their deals.

“It was not our idea to provide bad service,” he said.

When it was put to Teixeira that the property in Kimmage was overcrowded he said “we’d love to have one in each room, but they can’t afford” that.

He said the agency had now decided to stop running accommodation, and will return the deposits to the current tenants.

“I don’t want to be doing something wrong . . . Our idea wasn’t to do anything bad,” he said. He said the company planned to discontinue the housing arrangement by this month.

Several English language colleges listed on the agency website as partners denied they had any agreement with the firm. Dublin Centre of Education, an English language school on Cumberland Street North said they worked with the agency about five months ago. A spokesman for the school said, following some complaints from students that they did not receive adequate guidance from the travel agency, the school ended the agreement.

Images of three rooms advertised recently in private social media groups show bunk beds in the kitchen and living rooms of properties. Current legislation on rental standards does not ban beds in the living room or kitchen.

A spokesman for the Department of Housing said local authority inspectors may raise issue with cases where beds in the kitchen or living room create a fire safety problem. “It would then be for an inspector on the ground to make a call about the suitability of the dwelling,” he said.

Dublin City Council inspected 1,751 rental properties in 2016 and in 79 per cent of cases (1,388) the dwellings did not meet minimum standards.