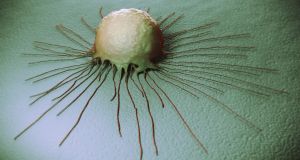 A cancer cell. More than 40,000 new cancer cases were diagnosed in Ireland in the past year. Photograph: Getty Images

Ireland’s survival rates for cancer patients are now in line with the European average, though the number of cases here is expected to rise sharply up to 2040 because of an ageing population, according to a major international report.

The latest figures published by The Lancet confirm Ireland is moving up the global rankings but has yet to achieve the consistently high success rates of best-performing countries.

The “Concord-3 study”, published on Tuesday, analyses individual patient records from 322 cancer registries in 71 countries (home to more than two-thirds of the world’s population) to compare five-year survival from diagnosis for more than 37.5 million adults and children with one of 18 common cancers.

These cancers represent 75 per cent of all cancers diagnosed worldwide between 2000 and 2014 and 100 per cent of Irish cancers cases occurring within Irish health services – and recorded by the National Cancer Registry Ireland.

Irish Cancer Society head of research Dr Robert O’Connor said the report shows Irish survival rates “across a lot of cancers continues to increase”. This was due, he said, to improved research, better diagnosis, more modern treatments in chemotherapy and radiotherapy and enhanced co-ordination of services.

Concentrating services in eight academic centres for adults and one for children; the use of multidisciplinary teams and better-trained clinicians also ensured more successful outcomes, he added.

Data going back to 2000 confirmed Ireland “had a long way to catch up” to achieve a mid-ranking but in the latest period had achieved a relatively significant “step-up”.

Progress, he warned, would be tempered by the inevitable consequences of an ageing population and overall population growth.

More than 40,000 new Irish cancer cases were diagnosed in the past year, and that is set to continue to rise by 2,000 to 3,000 cases a year over coming decades. While Irish people with cancer were living significantly longer, this was placing additional demands on Irish healthcare services, Dr O’Connor added.

He said eight out of 10 Irish women with breast cancer could now expect to live for at least five years and up to 10 years, while nine out of 10 of those with prostate cancer do so.

Less progress has been made with more aggressive cancers, such as pancreatic and ovarian cancers, where treatment options were more limited – though this is seen, too, in many countries, he said.

Separately, substantial investment is needed to ensure that the 170, 000 people currently living with cancer in Ireland – and those who come after them – “come back from treatment and thrive”.

“Treatment doesn’t stop when you walk out of the oncologist’s office. We want to ensure people are given the best opportunity for full recovery,” Dr O’Connor said.

After taking into account international differences in the age profile of cancer patients and the risk of death from other causes, survival for most cancers has been found to be consistently high over the past 15 years in the United States, Canada, Australia, New Zealand, Finland, Norway, Iceland and Sweden.

With colon cancer, the best-performing countries achieved more than 70 per cent survival five years after diagnosis, while in Ireland survival rates were between 60 and 69 per cent.

Twenty-five countries recorded an 85 per cent survival rate for breast cancer. Ireland achieved an 80-84 per cent rate. On prostate cancer, five-year survival was approaching 100 per cent in the US, Martinique and Puerto Rico; Ireland was in the “at least 90 per cent” category.