Hutch funeral told: ‘This is a family, not a cartel’ 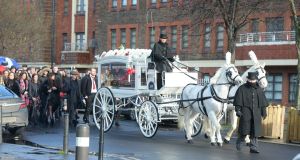 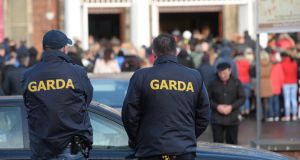 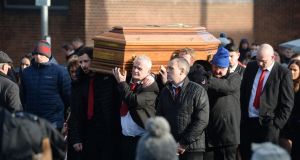 A coffin bearing the remains of Derek Coakley-Hutch is carried into Our Lady of Lourdes Church, Sean McDermott Street. Photograph: Alan Betson 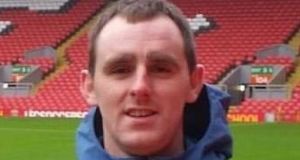 Mourners at the funeral of the latest victim of the Kinahan-Hutch feud heard that a family was under attack “not a cartel”.

Hundreds of people filled Our Lady of Lourdes Church on Seán McDermott Street in Dublin’s north inner city for the emotionally charged service.

The funeral Mass heard he was a loving father known for his kindness and sense of fun, and his life had “unexpectedly” been taken in the feud.

Liam Byrne, a friend of the Hutch family who knew Derek Coakley Hutch very well, said everyone was stunned he had been killed.

In an address on behalf of the family, he spoke of the deceased as “an absolute gentleman” who revelled in practical jokes.

“This guy,” he said gesturing towards the victim’s coffin, “only 27 years of age, I can’t believe it.

“That smile, and so kind. The love that he generated in the area around here.

“Just look at the messages on Facebook; the love for him. That’s this guy. I’ll never forget him.”

He said when Mr Hutch’s father, also Derek, died nine years ago he had been “a rock” in support of his mother Noeleen.

Mr Byrne then made reference to the funeral of feud murder victim Gareth Hutch in May 2016, a cousin of the man buried on Wednesday.

“It was a beautiful sunny day and a lot of the lads at it were wearing sunglasses.

“There were told ‘come here, this is not a cartel, this is a family, take them off’.”

Mr Byrne then paused and repeated, more decisively, what he had said: “This is a family, not a cartel.”

The statement was greeted with a prolonged round of applause from those in the congregation.

There was a heavy Garda presence in the area around the church service. Uniformed and unarmed gardaí closed the streets and directed traffic away from the area.

Garda vans and unmarked Garda cars were parked in multiple locations in the streets around the church, with armed gardai and the Public Order Unit on standby.

The dead man’s remains were brought to and from the church in a white horse-drawn carriage. His burial took place in Glasnevin Cemetery after the service. His uncle Gerry Hutch, also known as The Monk, did not attend the funeral.

Derek Coakley Hutch was the 14th person to be killed in the Kinahan-Hutch feud. He was the fourth member of his family to die in the dispute.

Last November a court was told how he had turned his life around.

He had pleaded guilty to his role in a robbery in 2015. However, the full four-year prison term was suspended as the judge remark on the “Trojan” efforts he had made to overcome his drug use.

She also noted he had received very favourable reports from the Probation Service and his drugs counsellors.

However, on the day he died he was trying to aid drugs being smuggled into a prison for his brother Nathan.

Derek Coakley Hutch had driven two friends to a halting site beside the perimeter wall of Cloverhill Prison. And when the men he was with got out of the car to throw the drugs over the prison wall, they left him alone and he was shot dead in his car.

Nathan Coakley Hutch, regarded as a dangerous criminal, was not granted temporary release for his brother’s funeral today.

However, he wrote a dedication to his brother which was read out at the service.

“To my brother Derek, what can I say,” it read. “I’m lost for words. I can’t believe what has happened.

“It’s just so hard to believe. I had only seen you a couple of hours before you were taken from us.

“I just can’t get my head around it. You were my older brother and I loved you with all my heart.

“Derek, I want you to know your two young children Layla and Brody will never want for anything. “As you are aware they are loved so much and that will never change. I will always be there for them bro.

“We know you are no longer with us but one thing is for sure, you will never be forgotten by all your family and friends.

“So God bless you Derek, shine bright, keep that smile on your face. And one day we’ll smile together.

“Sleep tight bro, love you so much, your little brother Nathan.”

Fr Michael Casey told mourners that in the face of the recent violence, including last night’s murder of Jason Molyneux in the north inner city, “we must not forget who we are.”

He said the dead man’s young children – Layla and Brody – had been “robbed of their father”.

His mother Noeleen, partner Nikita and the wider family were now enduring pain and suffering.

“We are children of light not of darkness. We are called to be peacemakers, not people of violence,” he said.

“The shocking, barbaric, violent, cowardly act of the killing of Derek, fondly known as Del Boy, last Saturday week and the consequent havoc, pain, suffering and devastation that the family and indeed larger community must endure is wrong, pointless and without justification.

“This reign of violence and total disrespect for human life carried out by people who have become soulless is frightening and leaves us all vulnerable.

“This spiral of violence, revenge, retaliation and the ensnarement of many in this web of what can only be described as evil has led to the destruction of the most precious gift - that of life itself and our call to be human.”

People of violence had “hardened, closed hearts” and “have become the living dead” as a result.

“No parent brings a child into this world to take the life of another person.

“Yes, we are a community that again has had to walk in darkness and in the shadow of death, but we like Derek have seen a great light.”

All of the 14 Kinahan-Hutch feud murders to date, bar two, have been carried out by the Kinahan international cartel against the Hutch side.

The violence has been characterised by the Kinahan gang killing mainly so-called soft targets - members of the Hutch family or their associates who are not directly involved in the feuding.

In some cases, the victims have had no real active involvement in organised crime.

Derek Coakley Hutch’s cousin Gary Hutch (34) was shot dead in Spain in September, 2015. He was once a member of the international Kinahan drugs cartel. He fell out with the gang and then tried to kill Daniel Kinahan, the son of cartel leader Christy Kinahan.

That gun attack was botched and another man wounded by mistake, Hutch was later murdered. His fatal shooting effectively began the feud.

In February, 2016, 59-year-old taxi driver Eddie Hutch – an uncle of cousins Gary and Derek – was shot dead. He was gunned down at his home on Poplar Row, Dublin.

Another cousin, Gareth Hutch (35), was shot dead in July, 2016. A man approach him from behind in a Dublin car park and shot him dead.

Mr Molyneux, who was due to have helped to carry Mr Hutch’s coffin at the funeral, had been warned by the Garda his life was at risk due to the Kinahan-Hutch feud.

Gardaí believe he was killed as part of another dispute that has already claimed two lives in Ballymun.