Tributes paid to Auschwitz survivor (97) who settled in west Cork

Walter Bujakowski worked at Auschwitz and was then interned there 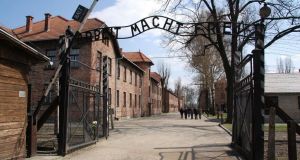 Walter Bujakowski, who was originally from Biala Podlaska in Eastern Poland, survived Auschwitz and later moved to London where he met and married Kathleen Hurley from Drimoleague.

Warm tributes have been paid to an Auschwitz concentration camp survivor who lived in West Cork for almost 40 years but passed away last weekend at the age of 97.

Walter Bujakowski, who was originally from Biala Podlaska in Eastern Poland, survived Auschwitz and later moved to London where he met and married Kathleen Hurley from Drimoleague.

The couple lived in London for a number of years where Mr Bujakowski worked as an accountant for construction firm, Taylor Woodrow before they moved to West Cork in 1981 settling in Lahana, Drimoleague.

Mr Bujakowski died in the Mercy University Hospital last Sunday and was buried at Drimoleague Church Cemetery on Tuesday in a private ceremony in keeping with HSE guidelines on Covid-19.

Mr Bujakowski rarely spoke of his war time experiences but he did tell his life story to Cliodhna O’Riordan from Kilmichael who made a documentary about him for her degree in Fine Art at the Crawford College of Art and Design.

Ms O’Riordan’s mother, Frances recalled how Mr Bujakowski told how he and his father had left their home to join the Polish Army but were captured by the Russians who had invaded Poland from the east on September 17th 1939.

They managed to escape and returned home and Mr Bujakowski left to join the Polish Underground in the winter of 1939 but was captured by the Germans who had invaded Poland from the west on September 1st 1939.

“Wally told how he was sent to three separate prisons before he was sent to Auschwitz in June 1940 - Auschwitz was an old Polish Army barracks and he was forced to work on turning it into a concentration camp,” said Ms O’Riordan.

“He was Prisoner 708 and he remembered being forced to put up barbed wire on the fence around the camp - he was there for a year and a half but his father paid a lot of money to get him released and he came back home.”

But Mr Bujakowski was arrested again by the Germans and was sent to work as a labourer in Germany before being sent back to Auschwitz for a period before being sent to a concentration camp near Hamburg in north-west Germany.

“He was there in July 1943 when the RAF bombed Hamburg - he said there was something like 3,000 planes bombed the city in one week and although they were 20 miles away, they could see the bombing it was so bright.”

“There were over 50,000 civilians killed in those raids and Wally was one of a party of 100 or so from the concentration camp send to help remove the dead from the cellars - he said they were taking out 40-50 bodies a day.”

Mr Bujakowski was later transferred to another camp and from there to Berlin where he was forced to work repairing bombed rail lines but he managed to escape in 1945 after German guards told them the Americans were advancing.

He managed to join up with a group of French prisoners of war (POW) and stayed with them until the war ended at which stage he travelled to Italy where there were a large number of Polish POWs. From there he travelled to England.

According to Ms O’Riordan, Mr Bujakowski joined the British army and did various tours of duty in Hong Kong, Kenya, Rhodesia, Sudan, Malta and Cyprus before returning to the UK where he met his future wife, Kathleen Hurley.

According to Ms O’Riordan, Mr Bujakowski, a Catholic, was happy to move to Ireland because it too was a Catholic country and he often said that nearby Skibbereen reminded him of his home town of Biala Podlaska.

Survived by Kathleen who is now in her late 80s, Mr Bujakowksi was very popular locally and his near neighbour, Kevin McCarthy this week paid a fond tribute to his late friend, describing him as a quiet but very gifted individual.

“Wally’s story is an extraordinary story, surviving the concentration camps but he was very reluctant to talk about it - he might talk about it the odd time but very rarely - he was a very private man,” said Mr McCarthy.

“He was a gifted man with his hands whether it was stone work or wood work - he had own his lathe and he used to turn wood and he was a great gardener as well - he was very talented.”

Mr McCarthy said Mr Bujakowski was also a fine cook and enjoyed photography. “He was big into his cameras and he was a fine photographer with a good eye for a photo - we will all miss him,” he said.