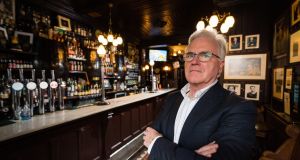 Pat Blake of Blakes of the Hollow, Enniskillen is preparing to close his pub once again. Picture: Ronan McGrade

Pat Blake has September 23rd marked on a wall chart in his office in Enniskillen, Co Fermanagh. It was the date his pubs reopened after months of closure during lockdown; only three weeks on, he is preparing to close them again.

“Unless there’s something very substantial put in place... I see large scale redundancies across the licensed trade in Northern Ireland.”

Ministers in the North announced on Wednesday that the hospitality sector is to close – with the exception of food deliveries and takeaways – in an attempt to halt the spiralling number of coronavirus cases.

It is among a range of new restrictions to come into effect from 6pm on Friday, and which will last for an initial period of four weeks, though this could be extended.

Industry body Hospitality Ulster has called for immediate financial support, warning that there will be “thousands upon thousands of job losses”.

“We don’t want to see a financial gesture,” said its chief executive Colin Neill “but a significant payment made to all those in the sector that have had their means of making a living stripped away from them for the greater good.”

Pat Blake’s family has been in the pub trade for generations. Blake’s of the Hollow in Enniskillen opened in 1887. He also owns Blake’s in nearby Derrylin as well as two off-licences and an undertakers.

Of the trade lost during lockdown, he says, “I can’t quantify it, and I probably would wish to push that as far as possible into the back of my mind at the moment”.

His greatest concern is his staff: “How are we going to be able to retain them and provide continuity in regards to their employment? That is the biggest single fear.”

Already, Blake says, there has been “a trickle of our staff leaving, looking for alternative secure employment... so we are already in difficulty in regards to holding onto our best staff, and that is only going to get worse.”

What is needed, he says, is an indication from the North’s Executive “as to what might be brought forward in regard to assisting the licensed trade”, particularly in regard to paying staff wages once the existing job retention “furlough” scheme runs out at the end of October.

The Executive Office has said it will “urgently engage with sectors and work on support for those affected as a matter of priority”, but as yet there are no details as to what this support might look like.

A financial support scheme for businesses in the Derry and Strabane area, which has been under additional restrictions since October 5th, was introduced on Wednesday, with a maximum payment of between £800-£1,600 for every fortnight a firm is closed.

Blake has sympathy with Ministers, describing the Assembly as “between a rock and a hard place”, though he does “seriously query” the requirement to close off licences at 8pm rather than 10pm.

“If the thought is to stem house parties, I don’t see in any respect how closing off-licences two hours earlier is going to contribute towards that. People will just simply buy their alcohol those couple of hours earlier.”

He also emphasises the uncertainty faced by the trade.

“While the indication is four weeks, nobody can guarantee that. Christmas trading at this stage doesn’t bear thinking about,” he adds, though he says he hopes the virus will have been sufficiently suppressed by then to allow them to reopen.

The hospitality industry is “unfairly” bearing the brunt of the restrictions, he claims, noting the majority of businesses were scrupulous in implementing all the safety measures necessary to reopen.

“We are fortunate in that we have a wide and varied business and to have been established for so long, but we are aware of many pubs in Fermanagh in particular who are in serious difficulties and will struggle to survive.”