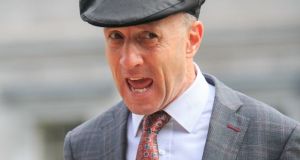 There was considerable delight in the Healy-Rae heartland this weekend after it emerged that the family-owned shop in Kerry had sold a winning ticket in the EuroMillions draw.

While the jackpot of just under €55 million went unclaimed in Friday night’s draw, the Mace in Kilgarvan where TD Michael Healy-Rae is postmaster sold Ireland’s top prize winning ticket, a quick-pick worth €34,496.

In addition to housing the shop where the golden ticket was sold, the complex is also home to the local post office, sorting office, constituency offices for Mr Healy-Rae and his brother Danny - who owns the neighbouring pub - as well as a petrol station and a cafe.

The winner matched the first five numbers in the draw before drawing an agonising blank on the all-important Lucky Star numbers that would have secured them the top prize.

Almost as soon as the shop was announced as a winner, people in the town started speculating as to who might be the holder of the ticket.

There are less than 200 people living in Kilgarvan, according to the most recent figures, and with Covid-19-related travel restrictions in place across the country, the chances are high the winner is local.

The speculation as to who it might be is likely to continue for sometime, however, with locals suggesting the winner will play their cards close to their chest.

“It’s such a small area that I’d say whoever won it will want to keep it to themselves but we are all happy out to have sold the winning ticket,” said staff member James O’Connell on Sunday morning.