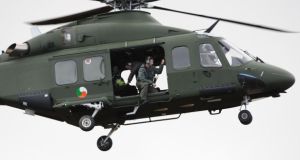 RACO said ‘serious consideration should be given to making the Air Corps the primary agency for this task and providing it the funding, structures, and resources to do it’. File photograph: Aidan Crawley

The Government should return responsibilities for aviation search and rescue services to the Defence Forces rather than having a contract which cost more than €350 million over the last couple of years with the private sector, military officers have urged.

In a submission to the Minister for Defence Simon Coveney in relation to the Government’s planned new Commission on Defence, the Representative Association for Commissioned Officers (RACO) said “serious consideration should be given to making the Air Corps the primary agency for this task and providing it the funding, structures, and resources to do it”.

“The State currently contracts a civilian company to provide most of its search and rescue services and paid €367million from the (Department of )Transport vote in 2018/19. As an essential capability, however, the Air Corps must train and organise to provide this live-saving service at a moment’s notice. Effectively, the State is relying on the Defence Forces to maintain the capability but diverting the funding for same to a civilian company.”

The Government has initiated a new procurement process to secure aviation search and rescue services to come into effect when the current arrangement ends.

However, Government Ministers signalled in the Dáil last week that responsibility for airborne search and rescue services were not to be given back the Defence Forces.

Mr Coveney said the current contract for the search and rescue helicopter service was between the Minister of Transport and a civil helicopter operation, CHC Ireland DAC. He said the contract commenced in July 2012 for a period of 10 years, with an option to extend for a further three years.

“This included an appraisal of various service delivery options, including where the State assumed full responsibility for the service, either through the Air Corps or a dedicated Irish Coast Guard aviation branch. Both were ruled out for a variety of reasons but notably the risks to the State and questions around potential affordability and deliverability.”

The general secretary of RACO Conor King said on Sunday : “Officers are calling for the meaningful involvement of the Defence Forces in the future of the State’s search and rescue service. This has obvious benefits to the Air Corps in terms of connection to community, capability and retention, and to the State in terms of value for money and accountability for public funds. The Air Corps can deliver significant cost effective solutions from a helicopter (rotary), fixed wing and drone capability perspective, which must be factored in the context of future service provision. All that is required is the political will.”

The involvement of the Air Corps in regular search-and-rescue services was ended by the then government in late 2003.

In its submission to the Minister, RACO said the Defence Forces were currently operating “in a state of near crisis and with great uncertainty about their ability to carry out their assigned roles going forward”.

“ The proposed Commission on the Defence Forces is a once-in-a-generation opportunity to address the issues that have brought us to this point.”