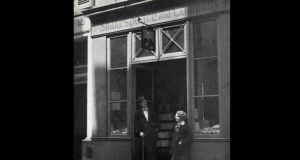 One of the world’s most iconic bookshops, Shakespeare and Company, has appealed to its customers for help as it is struggling, with sales that are down almost 80 per cent since March.

The celebrated Parisian bookstore told readers on Wednesday that it was facing “hard times” as the Covid-19 pandemic keeps customers away. France has imposed a new four-week national lockdown as coronavirus cases continue to surge; large swathes of the country, including Paris, are already under a night-time curfew.

“Like many independent businesses, we are struggling, trying to see a way forward during this time when we’ve been operating at a loss,” said the shop in an email to customers, adding that it would be “especially grateful for new website orders from those of you with the means and interest to do so”.

First opened by Sylvia Beach in 1919, the Parisian institution was frequented by writers including F Scott Fitzgerald, Ernest Hemingway, TS Eliot and James Joyce in the early 20th century. The shop was nicknamed “Stratford-on-Odéon” by Joyce, who used it as his office. Beach published Joyce’s book Ulysses in 1922.

George Whitman opened today’s version of the shop in 1951, with James Baldwin, Lawrence Durrell, Allen Ginsberg and Anaïs Nin among its later visitors.

Whitman envisaged the shop as a “socialist utopia masquerading as a bookstore”: writers are invited to sleep for free among the shelves in exchange for a few hours helping out, and more than 30,000 of the guests, named “tumbleweeds” by Whitman, have stayed since the store opened.

“We’re not closing our doors, but we’ve gone through all of our savings,” Whitman’s daughter, Sylvia Whitman, told the Guardian. “We are 80 per cent down since the beginning of the first wave. We’ve now gone through all of the bookshop savings, which we were lucky to build up, and we have also been making use of the support from the government, and especially the furlough scheme. But it doesn’t cover everything, and we’ve delayed quite a lot of rent that we have.”

The store was closed for two months during France’s first lockdown, and did not sell books online over that period on advice from trade body the Syndicat de la librairie française. Whitman and staff are now preparing for a second closure.

“The one big difference is that we’re adamant this time we’re going to be ready to keep the website open,” Whitman said.

Since appealing to customers on Wednesday morning, Whitman said the shop had been deluged with offers of support – and more importantly orders, including one from an old “tumbleweed”, who placed a €1,000 order for three subscriptions to the shop’s Year of Reading offer.

“I think it’s going to give us a real boost in getting through this next chapter,” said Whitman. “We haven’t said anything publicly before because we just feel so aware everyone is in difficult situations.

“We just want to ask people to help us do what we do, which is sell books – we don’t want to just say, ‘OK, open your wallet and give us money.’ It’s like, ‘Look, here’s what we have on our shelves. Here are some of the lovely rare books that we have. And it would be amazing if you could get one now.’”

The appeal follows a similar move from iconic New York bookshop the Strand, which said last week that the impact of Covid-19 meant that “we cannot survive the huge decline in foot traffic, a near-complete loss of tourism and zero in-store events.”

Nancy Bass-Wyden, proprietor of the 93-year-old American store, said revenue was down nearly 70 per cent from 2019, and that “we are now at a turning point where our business is unsustainable”. After the appeal, Bass-Wyden said the shop had received 25,000 orders over the weekend, worth almost $200,000 (€170,000). – Guardian