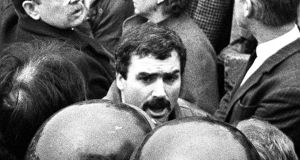 Stakeknife has previously been named as 73-year-old west Belfast man Freddie Scappaticci (centre in a file image from 1987) who denies he was Stakeknife, or a British spy. Photograph: Pacemaker

Four people, including two former MI5 officers, will not face charges in connection with an investigation into the agent codenamed Stakeknife.

The North’s Director of Public Prosecutions, Stephen Herron, said on Thursday that decisions not to prosecute had been issued in regard to four individuals who were reported to the Public Prosecution service (PPS) by the Operation Kenova investigation team.

Stakeknife has previously been named as 73-year-old west Belfast man Freddie Scappaticci. He denies that he was Stakeknife, or that he was a British spy.

The multi-million pound Operation Kenova – which is led by the former Chief Constable of Bedfordshire police, Jon Boutcher – is investigating a number of Troubles-era cases including allegations of criminality against Stakeknife.

One individual, understood to be the agent Stakeknife, was considered by the PPS for the offence of perjury. This related to making affidavits sworn between 2003 and 2006, and the circumstances in which a decision was subsequently taken not to prosecute, the PPS said.

Three others – two former members of MI5 and a former PPS prosecutor – were considered for the offence of misconduct in a public office.

Mr Herron said in all four cases, he concluded there was “insufficient evidence to provide a reasonable prospect of conviction for any offence.”

These are the first decisions issued by the PPS in regard to the inquiry into Stakeknife. A number of other files are being considered by the PPS for potential offences including murder, false imprisonment and assault.

The PPS said decisions on these matters would be issued in due course.

Jon Boutcher said the decision did not mean prosecutions were out of reach. “The challenges of bringing a prosecution for Northern Ireland legacy cases, both from a legal and practical perspective, are well-known and have been described in my evidence to the Northern Ireland Affairs Select Committee,” he said.

“We await the remaining decisions with keen interest. “Most importantly, at the outset of Operation Kenova, I made commitments to provide families with our findings as to what happened in their individual cases and to deliver a public-facing report. These two key commitments remain at the forefront of our endeavours.

“Legacy should not be judged simply through the prism of prosecutions, it must be considered as a process which provides the truth to those families who have lost loved ones,” he said. Additional reporting — PA