Tory’s biggest employer, Óstan Thóraigh has been at centre of island life since late 1800s 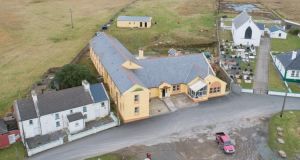 The 14-bedroomed Óstan Thóraigh is ‘a chance for someone to embrace island life in a strong community on one of Ireland’s most beautifully scenic islands’, according to Letterkenny auctioneer Gareth McLarnon.

One of Ireland’s most remote island hotels, which had Roger Casement as a guest, has gone on the market for less than the price of a three-bedroom semi-detached home in Dublin.

Described as a “fantastic opportunity to acquire a landmark property with huge potential”, Óstan Thóraigh is the only hotel on secluded Tory Island, a Gaeltacht island nine miles off the rugged coast of County Donegal.

On the market for €400,000, the 14-bedroomed hotel is “a chance for someone to embrace island life in a strong community on one of Ireland’s most beautifully scenic islands”, said Letterkenny auctioneer Gareth McLarnon.

Casement enjoyed his time on Tory as a hotel guest, but Easter Proclamation signatory Joseph Mary Plunkett passed up the chance of staying there, finding it “too sombre”.

“Properties like this don’t come to market very often in Ireland. We are expecting quite a bit of interest,” said Mr McLarnon. The hotel is being sold as a going concern by owner Sean Doherty, the island’s former lighthouse keeper.

Tory’s biggest employer, Óstan Thóraigh has been at the centre of island life since the late 1800s, when the Ward family ran it as a hotel and general store, supplying everything from salted fish to marine chandlery.

It traded with passing ships while people from what Tory islanders call “the country” – the mainland – made regular shopping trips to the hotel over the decade. In the decades since, it been a favourite for artists and nature-lovers.

Tory Island, which is part of the Donegal Gaeltacht and has one of the highest rates of native speakers anywhere in Ireland, has a permanent population of 140, but that doubles in the summer.