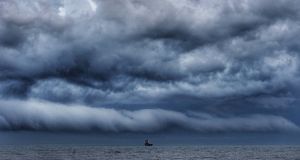 Separate appeals for people to be extra cautious as Storm Hannah hits Ireland have been made by the Garda, Irish Water Safety, the ESB and organisations working with the homeless.

With red wind alerts put in place for counties Clare and Kerry and orange and yellow alerts in place for large parts of the country, the Garda said cyclists, motorcyclists and pedestrians should be aware they are particularly vulnerable to strong gusts.

Drivers of high sided vehicles in all parts of the country should also take all necessary precautions and pay attention to the warnings, the Garda said.

People living near coastal, cliff and waterway areas, particularly those with children, have been warned to be extra cautious considering the gusty winds forecast.

The Cork Simon Community said it was using every available space, including the floors of recreation rooms, for mattresses so every homeless person seeking somewhere to sleep indoors during the storm would be accommodated.

The Dublin Region Homeless Executive said Dublin was expected to miss the worst of Storm Hannah, but the executive was monitoring the situation nonetheless. The executive said it had procedures it could put in place rapidly in response to weather alerts and would be following Met Éireann’s forecasts closely.

The ESB said all available ESB Networks teams were on full alert and “will continue to monitor Storm Hannah as it approaches Ireland and tracks across the country”.

Shannon and Cork airports urged passengers due to fly to check the status of their flights with their airlines.

It is understood that ferry sailings from Doolin to the Aran Islands have been cancelled. Aran Island Ferries has suspended services to Inis Meáin and Inis Oirr.

Bus Éireann announced the cancellation of a number of services on Friday evening, including all Route 51/ 51X services from Limerick to Galway after 6.25pm and a large number of Route 343 services between Limerick/Shannon/Ennis from 7.35pm to just after midnight.

Clare County Council has urged people in the county not to travel during the red warning period, and said that overnight travel thereafter “should only be undertaken if absolutely necessary”. Organisers of events taking place in the county this evening are being advised to postpone them in the interests of public safety.

Clare residents are being advised to tie up any loose belongings and stay in their homes. Carmel Kirby, director of services at Clare County Council, said the local authority is expecting fallen trees and debris, while county council teams would only be able to respond to “very severe incidents” this evening. She said residents should stay in their homes until the worst of the winds had passed.

Cork County Council is advising motorists to take caution and people to stay away from coasts, especially in the southwest. Kerry County Council was due to host an emergency co-ordination meeting on Friday afternoon and has launched a helpline on 066-7133588.

Fire authorities across the country have reminded people who own trampolines to store them correctly in anticipation of strong winds. “Disassemble them or make sure they are anchored down securely,” a spokesman said. “Same for any garden/patio/balcony furniture.”

The spokesman also advised people to stock up on batteries and charge devices in preparation for any possible power outages. It advised against the use of real candles, recommending LED alternatives.

To avoid spot flooding entering your home, the fire brigade said to ensure nearby drains are clear of leaves.

Water Safety Ireland has also warned people to stay away from the edges of waterways during Storm Hannah, as coastal and inland waterways will be dangerous due to heavy rain and strong gale force winds.

He said children were “naturally curious about water; therefore parents and guardians should caution them that small streams when flooded are very fast and that floodwater hides the true depth. Fast-moving water can exert pressure against the legs of someone attempting to cross it.

“Because water displaces body weight, the deeper a person becomes immersed the less the person weighs, so the more difficult it is to remain upright. Never put your feet down if swept away in floodwater, because foot and body entrapments and pinning are a leading cause of accidental death in rivers.”