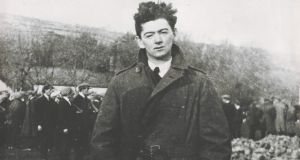 Tom Barry utilised good intelligence on where exactly a party of British Auxiliaries from C Company, based in Macroom, would go on patrol and selected a site in Kilmichael which offered his men ‘good killing ground’

IRA guerrilla leader, Tom Barry showed great military expertise in planning the Kilmichael ambush in West Cork 100 years ago today, both in selecting the ambush site and in the manner in which he deployed his men, according to a military historian.

Historian and former soldier, Gerry White said Barry utilized good intelligence on where exactly a party of British Auxiliaries from C Company, based in Macroom, would go on patrol and selected a site in Kilmichael between Macroom and Dunmanway which offered his men “good killing ground”.

“He deployed his men very well – he deployed them to ensure overlapping fields of fire, the area selected would be well covered with rifle fire but he also deployed them very close to the road as he was acutely aware he didn’t have the military training that the Auxiliaries had,” said Mr White

“Barry’s men didn’t have the opportunity to go to a rifle range and practice like the Auxiliaries had – his men had very little military training so where possible, he deployed them very close to the road – his philosophy as he said, later was ‘There are no bad shots at ten or 15 yards’.”

Mr White made his comments in a new documentary made by local historians Colum and Shane Cronin for Coppeen Archeological, Historical and Cultural Society entitled Kilmichael – A Story of a Century which makes extensive use of drone footage, historic maps and archival interviews.

In the engagement which took place at around 4pm on November 28th 1920, the Flying Column of the west Cork No 3 Brigade of the IRA ambushed a party of Auxiliaries, killing 16 of them while suffering three casualties, Lt Jim O’Sullivan (23), Michael McCarthy (23) and Patrick Deasy (16).

Narrator, Colum Cronin said: “As a local historian, I have always had a keen interest in the story of the Kilmichael Ambush – 100 years later it is more important than ever that we commemorate this event, an event that would send shock waves across the Irish Sea to the British Establishment.”

The documentary uses drone footage to survey the ambush site and a map made the following day by an engineer with the Auxiliaries, Lt E Fleming where he mapped where the bodies of the 16 dead Auxiliaries were found as well as where he believed the Flying Column members were positioned.

The documentary also uses archival interviews made by the late Fr John Chisholm with Kilmichael veterans, Jack O’Sullivan and Ned Young about their recollections of the ambush while it also addresses controversies arising from Tom Barry’s account of the ambush in Guerrilla Days in Ireland.

Historian, Prof Eunan O’Halpin of Trinity College Dublin addresses the issue of the Auxiliaries “false surrender” first questioned by Canadian historian, Peter Hart in his book “The IRA and Its Enemies: Violence and Community in Cork 1916-1923’ first published in 1998.

Historian, Dr Eve Morrison discusses a dispute in 1974 between Barry and fellow veteran, Liam Deasy whose brother, Patrick was killed in the ambush when Deasy published his book ‘Towards Ireland Free’ prompting a number of IRA veterans to disassociate themselves from Barry’s version.

The documentary also features contributions from author, Don Wood who tells the story of Auxiliary, Lt Frederick Henry Forde MC who survived the ambush and local historian Joe Creedon who tells of how Lt Cecil Guthrie who escaped the ambush only to be killed later by the local IRA.

It also examines the reprisals carried out by the Auxiliaries in Kilmichael in the following days including the burning of a number of homes and the shooting dead by the Auxiliaries at Cronin’s Bar in Coolderrihy of farm labourer, Dinny O’Sullivan, who had no involvement in the ambush.

Meanwhile Cork County Council has also produced a documentary to mark the centenary of the Kilmichael Ambush where local historian, Con O’Callaghan tells the story of the ambush and local men, Conor O’Driscoll and Mick O’Brien recall their fathers’ participation in the engagement.

“The wealth of cultural heritage in Cork County that we have today is thanks to generations of historians, archaeologists and ordinary people whose dedicated work throughout the years has enriched our understanding of our history,” said Mayor Linehan Foley.

“While these commemorations acknowledge the contributions of great individuals like MacCurtáin, MacSwiney and Tom Barry, it’s important we remember the significant community and voluntary work that has gone into enabling us, one hundred years later, to continue to learn about our history.”

Kilmichael - A Story of a Century can be viewed at the following linkhere:e