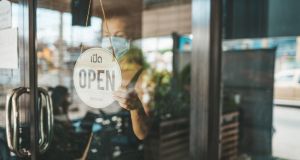 There are expected to be tighter rules including cutting the time allowed at a table and cutting the number of people allowed to sit together in restaurants. Photograph: iStock

A public health expert has said it would be a sensible precaution not to open wet pubs next month.

Professor Emer Shelley, Dean of the Faculty of Public Health Medicine at the Royal College of Physicians in Ireland, said while she understood it was a difficult situation for the owners of small pubs, the fact was that alcohol was a disinhibitor and food actually delayed the increase of alcohol levels in the blood.

Prof. Shelley said she thought it was right for the country to come out of Level 5 restrictions because a “deal” had been made with the public that if there were restrictions for six weeks then there would be some sort of normality in December.

“Promises have to be kept, but as safely as possible,” , she told RTÉ radio’s News at One.

However, publicans have said any decision to keep wet pubs closed while allowing gastropubs and restaurants to reopen next month will be “political” and “based on zero evidence”.

The Licensed Vintners Association (LVA) was reacting to news that the Government is set to reject advice from the State’s public health experts and allow restaurants and gastropubs to reopen in December when the State exits Level 5. The Cabinet is set to approve the plan later today.

Senior sources said there would be tighter rules including cutting the time allowed at a table and cutting the number of people allowed to sit together in restaurants.

The LVA said “any ‘risk’ is the same for all venues where alcohol is served, with zero distinction being made between these different types of outlets.

“There is no evidence which exists that ‘wet’ pubs pose a greater risk than restaurants or gastropubs. The same regulations and enforcements are in place for all these types of venue – the same social distancing and the same time limits,” said Donall O’Keeffe, chief executive of the LVA, which represents Dublin publicans.

“We welcome restaurants and gastropubs being allowed to trade, but if the Government allows them to open while keeping the wet pubs closed, it will be exposed as simply their political choice,” he said.

The owners of a number of a number of well known restaurants in Dublin are calling for clear and concise guidelines as soon as possible from the Government so they can open safely.

Sally Ann Clarke of L’Ecrivain told RTÉ radio’s Morning Ireland that they have full bookings from December 1st, the date on which Level 5 restrictions were due to be lifted. “We need to know as soon as possible so we can let suppliers know and reschedule bookings if we can’t open on the first.”

Damien Allen, proprietor of The Orange Goat restaurant in Ballsbridge, echoed the call for clear and concise guidelines. He also opened a second premises in Killester during the pandemic which has focused on takeaways while refurbishments have been completed. The changed commercial market meant there were more favourable rates which promoted him to open the second outlet.

“We had tremendous support from the locals and we remain positive about getting people indoors.”

Ms Clarke pointed out that earlier in the year when restrictions were first introduced in restaurants customers knew what they could and could not do “and it worked very well. People were happy with that.”

There were screens between tables and tables were staggered. “People felt safe and it was good to be out.” Reacting to a suggestion that the amount of time that people could be in a restaurant could be reduced to one hour (from one hour 45 minutes), Ms Clarke said that would not be feasible in L’Ecrivain as it was not a casual dining space.

Mr Allen said it would be very difficult to “make it work” with fewer than 15 customers in his restaurant. Under Covid restrictions his restaurant in Ballsbridge could seat 20 at any time and the Killester premises could seat 30.

Ms Clarke said that restaurants were good at policing the guidelines and that the public understood they could not move about as they would have done previously.

“The focus now moves to the earliest date of reopening and re-enforcement of guidelines / protocols for safe - controlled- regulated restaurant environments,” he tweeted.

Chief executive of employer’s group IBEC, Danny McCoy told RTÉ radio’s Today with Claire Byrne programme that a suppression strategy was a blunt instrument which was also suppressing livelihoods. A sensible society should be able to provide facilities and then it would be up to individuals to exercise personal responsibility.

“We all know it is about personal behaviour.”

Not knowing the details of when or how restrictions would be lifted was very stressful for businesses, he said.

People seemed to think that moving from Level 3 to Level 5 was going to provide a linear response, but it had not, he said. A more reasonable response would have had a better response from the public.”