Michael Maloney assumed the voice of Dermot Kennedy he could hear in the background was from a backing track only for his musical hero to appear from backstage to duet live with him. Video: RTE 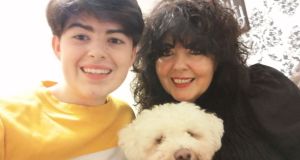 During his nerveless performance on the Late Late Toy Show, singer Michael Maloney assumed the voice of Dermot Kennedy he could hear in the background was from a backing track.

Mikie, as he is known, was having too much fun to turn around and see that in fact his musical hero was singing Kennedy’s song Giants alongside him.

It was but one highlight of a Late Late Toy Show not short of highlights.

“My mind just blanked, but I said I’d better keep going anyway. The show must go on. I didn’t want to stop,” Mikie told The Irish Times on Saturday.

Afterwards Kennedy presented Mikie with a Fender left-handed signed guitar, a thoughtful present as both are left-handed.

Kennedy revealed to Mikie that he auditioned for the Late Late Toy Show, but was turned down.

“He told me that I was already a step ahead of him when he was his age.”

The 14-year-old student of the Jesus and Mary Secondary School in Gortnor Abbey in Crossmolina, Co Mayo is already an overnight sensation.

His Instagram followers went from 300 to 27,000 after his appearance on the Late Late Toy Show and he was stopped twice for selfies on the way back from Dublin to Mayo.

His proud mother Sandra McLoughlin said her son sings from the moment he gets up in the morning until he goes to bed at night.

Along with singing, he plays the guitar, piano, violin, drums and ukulele. He has three music teachers.

“We were just blown away,” she said of her son’s appearance with Dermot Kennedy on the Late Late Toy Show.

“We were trying to prepare our kids for anything that could happen, but trust me, we couldn’t have prepared for that one.

“It has just given everybody such a lift. It’s just the most exciting thing that has ever happened in our lives. He didn’t take after me. His dad was very, very chilled and calm and Mikie would take after him.”

Mikie’s father Emmett Maloney died three years ago from cancer at the age of 59. He ran the successful Maloney’s Treffpunkt rock bar in Ballina which was a haven for music lovers in the west and a top destination for touring bands for many years.

“We do know that Emmett is sharing with us. We know that he organised this gig for him. We speak to Emmett every day,” Sandra added.