Shot, bayoneted and clubbed: the ruthless lengths the IRA went to at Kilmichael 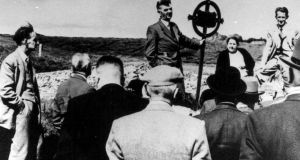 Tom Barry addressing former IRA colleagues at an annual commemoration of the Kilmichael ambush which took place 100 years ago on November 28th, 1920.

Long-forgotten files in the UK National Archives in London show that the Kilmichael ambush was “a fight to the finish”.

Sixteen members of the much-hated RIC Auxiliary division were killed on a lonely road between Macroom and Dunmanway in Co Cork 100 years ago this Saturday evening. One escaped, only to be beaten to death later. Just one badly wounded Auxiliary survived.

Up to November 1921, the British Cabinet had dismissed the IRA as the “murder gang”. Bloody Sunday and Kilmichael a week later convinced them, however, that they were operating against a well-disciplined and determined guerrilla army.

Now, autopsy records collated in the UK National Archives in Kew have been accessed in their entirety by Jim Herlihy, a former Garda and a member of the Historical and Reconciliation Police (Harp) Society. His book on the Black and Tans will be published in the New Year.

The autopsies were carried out by Dr Jeremiah Kelleher, the coroner for Macroom. His son, RIC District Inspector Philip Kelleher, had been shot dead by the IRA outside the Greville Arms Hotel in Granard, Co Longford four weeks prior to Kilmichael.

In his own account published in one of the best-selling books dealing with the War of Independence, Guerrilla Days in Ireland, Tom Barry said he exhorted his men to keep on firing, but he was coy about the details of what happened next.

All of those killed at Kilmichael were shot multiple times. There is evidence, too, of hand-to-hand combat, and wounds inflicted at close range on dead or dying men. Arthur Poole’s skull was fractured, possibly by a rifle butt.

William Pallister’s skull was fractured, too, “caused probably by an axe or some fully sharp metal object”, while three others, Christopher Wainright, William Barnes and Leonard Bradshaw were shot at close range.

The Kilmichael ambush was mastermind was Barry, the son of a Royal Irish Constabulary (RIC) officer, who had served in modern-day Iraq with the British Army Royal Field Artillery in the first World War, including at the Siege of Kut during Easter Week 1916.

Some people recoiled from the bloodshed, Barry revelled in it. On the night before Kilmichael he told his men that it was them or the Auxiliaries. It was kill, or be killed. By definition, a Flying Column had to be mobile and could not take prisoners.

The post-mortem results found in Kew do not shed any light on the thorny issue which has surrounded Kilmichael for decades – the notion that some of the Auxiliaries had engaged in a “false surrender” leading to the deaths of two IRA volunteers, Jim O’Sullivan and Mike McCarthy.

The autopsy reports show, says Herlihy, that the Kilmichael ambush was a 'fight to the finish' and that the IRA exhibited 'utter ruthlessness'

The late historian Peter Hart – in an argument that still provokes sharp feelings – alleged that Barry’s claims of a false surrender were a fabrication used to justify the killing of men after they had surrendered.

Writing in The Irish Examiner this week, historian Meda Ryan records that General Frank Crozier, who investigated Kilmichael on behalf of the Chief Secretary to Ireland, Hamar Greenwood, concluded that there had been a false surrender.

One Auxiliary, Henry Forde escaped. Hit with a rifle butt to the head, he was left for dead. He had a fractured skull and never served again. He was unable to give an account of what had happened in the immediate aftermath of the ambush.

The Auxiliary who escaped was Cecil Guthrie. He was captured by the IRA a day later. He was beaten to death and his body buried in a bog. Following a tip-off, his body was exhumed in 1926 and he was reinterred in the Church of Ireland graveyard in Inchigeelagh.

His wife, Irene was heavily pregnant. Suspecting that he had been taken prisoner, she believed he would return. She placed an advertisement in The Irish Independent on January 27th, 1921: “Cecil. Little Dorothy arrived safely. Irene”. Dorothy died in 2011.

Mr Herlihy believes Guthrie was doomed once he was caught.

“They couldn’t let any guy escape at that stage. He hadn’t a prayer,” he said. Besides O’Sullivan and McCarthy, the other IRA loss was 16-year-old, Patrick Deasy, who died of injuries in a farmhouse later that night.

The autopsy reports show, says Herlihy, that the Kilmichael ambush was a “fight to the finish” and that the IRA exhibited “utter ruthlessness” in endeavouring to ensure that all the Auxiliaries were killed.

“They made sure they were dead. It was that simple. The backlash would have been made [British reprisal] in Balbriggan or Rineen (in Co Clare) when there were huge retaliations . . . It was a huge victory for the IRA.

“It would have justified another retaliation on the men involved, but there was nothing for the authorities to even start on. It is also clear from the post mortems that the ambush party went around from man to man shooting and bayoneting those they thought were still alive,” he says.

Residence doused in petrol during Cork burglary 00:39
Health insurance matters – even in the days of premium refunds 00:00
Dublin hospital gave leftover vaccines to 16 relatives of staff 22:33
'Consider your choices, make the right ones': Thirteen more Covid-19 deaths, 2,944 cases 22:22
Women and children in mother and baby homes ‘abandoned by church’ 22:02