Two found hidden in truck being attended to by immigration authorities 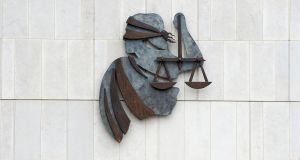 Dimitar Dichev (45) has been remanded in custody over a people-trafficking charge.

A Bulgarian man has been charged with two people-trafficking offences after two people were found hidden in a truck at Rosslare Port on Thursday evening. They are now being looked after by immigration authorities.

Dimitar Dichev (45), who has no fixed address in Ireland, was remanded in custody until next Tuesday. He was charged at Wexford Garda station before appearing in court on Friday evening.

Giving evidence before a late sitting of Gorey District Court, Garda Darin Sane of Rosslare Harbour Garda station said Mr Dichev, who had been furnished with a translator, made no reply when charged.

Speaking from the body of the court, Mr Dichev’s appointed solicitor Aideen Lawlor said the man was a father, and had been working on and off. He has not been working recently. Judge Kevin Staunton granted legal aid.

Mr Dichev is due to appear again before Wexford District Court on Tuesday and will reside at Cloverhill prison, and the solicitor told the court in Gorey that the position of Mr Dichev would be reserved until that date.

Meanwhile the two people found in the truck, who are believed to be known to each other, have been offered accommodation and welfare services by the Reception and Integration Agency (RIA).