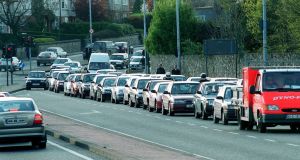 The southbound bore of the Jack Lynch Tunnel was closed by gardaí in an effort to allieviate traffic congestion.

The crash happened when a car travelling west on the N40 ring road at 8.30am overturned near the Carragaline turn-off and two other cars crashed into it.

The occupants of the cars were brought with minor injuries to Cork University Hospital. The incident caused immediate tailbacks and the Garda decided to close the south bore of the tunnel heading west.

They diverted traffic on the Dublin and Waterford roads through Tivolli on north side of the River Lee.

The Jack Lynch Tunnel is designed to carry 40,000 vehicles a day but now carries 90,000 vehicles per day, amounting to 25 million using it per annum.