Gardaí and other emergency services dealt with a serious four-vehicle collision on the quays in Dublin on Tuesday. Traffic came to a standstill in the area following the crash on Wellington Quay. 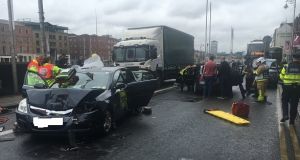 The scene of the crash on Wellington Quay in Dublin on Tuesday afternoon. Photograph: Cyril Byrne/The Irish Times

There was a security alert in Dublin on Tuesday after a car being driven through the city centre hit a number of other vehicles, including a Garda patrol car.

The driver, a student from a Dublin-based Middle Eastern family, did not stop until after he crashed into a truck.

The suspect (20) was pinned to the ground on Wellington Quay just after 2pm by several gardaí and searched. He was undergoing medical treatment at St James’s Hospital on Tuesday night.

Gardaí believed the suspect, who is a final year law student, had been suffering from extreme stress or anxiety which had worsened over the past week. Garda sources said the man was quickly identified and his family was contacted.

Informed sources said that while the investigation into the incident was still in its early stages, investigators were focused on the suspect’s mental state.

Detectives planned to speak to the suspect when he was discharged from hospital and he may face criminal charges.

As a precaution, his background will be fully examined and any contacts he has had of late, in person and online, will also be reviewed.

The incident began just before 2pm, when the suspect drove a BMW out of a multi-storey car park on St Stephen’s Green.

The car collided with at least one other vehicle in the St Stephen’s Green area before being driven through the south inner city onto Tara Street, where it collided with a second vehicle before turning on to George’s Quay.

The BMW then continued along the south quays and, on Wellington Quay, it  clipped a stationary Garda car, knocking its wing mirror off but failing to stop.

The gardaí in the patrol car prepared to drive after the BMW but it immediately hit a taxi from behind.

The impact of the collision with the taxi, which contained a driver and passengers at the time, pushed the BMW out into traffic, where it collided with a passing truck.

At least two people who were in the taxi were also taken to hospital. However, no serious injuries were reported.

Garda Headquarters at the Phoenix Park said an investigation to establish what had happened was under way at Pearse Street Garda station.