Transport Minister says free access to Drogheda could cost State up to €130,000 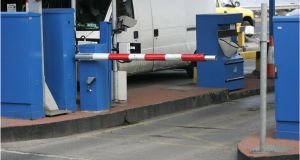 Shane Ross refused a request from Sinn Féin that the slip road tolls would be suspended for the week-long festival in August, which is expected to attract 400,000 visitors. File photograph: Dara Mac Dónaill/The Irish Times.

Suspending slip road tolls at Drogheda, Co Louth during the Fleadh Cheoil would create a precedent for any other event near a toll plaza, the Minister for Transport Shane Ross has told the Dáil.

Mr Ross refused a request from Sinn Féin transport spokeswoman Imelda Munster, that the slip road tolls would be suspended for the week-long festival in August, which is expected to attract 400,000 visitors.

He said it would mean the traffic on the slip roads would increase by six times from 3,000 to 18,800 a day to avoid the main toll junction.

Ms Munster, a TD for Louth, insisted it would not create a precedent because “Drogheda is the only town in Ireland which has a tolled slip road”.

But the Minister said Drogheda was also served by toll-free access points.

Mr Ross said it would cost between €115,000 and €130,000 and any loss of toll revenue would have to be paid by the Exchequer to the road toll company.

“Lifting the tolls would also create a precedent for any other toll charges to be lifted where an events was organised near a toll plaza,” Mr Ross said.

“In addition, it would be administratively impossible to distinguish between those attending the Fleadh and those simply avoiding the toll.”

But Ms Munster said that “when compared to the sports grant of €150,000 the Minister gave to Wesley College for parochial purposes, the removal of the slip road toll during the Fleadh would have an enormous effect on tourism and would benefit Drogheda, the Fleadh, the people of Louth and in particular the 400,000 visitors who will come”.

She accused Mr Ross of “putting absolutely no effort in” and said the Minister pledged to personally meet the operator of the toll Celtic Roads Group to plead the case. She said he was to get back to her by the end of February and she had contacted his office five times for a response. “That is a cowardly way to do business,” she said.

Mr Ross acknowledged that he had pledged to contact Celtic Roads Group and he contacted the group in recent weeks “and I have taken trouble with it”.

The Minister added that studies had shown that removing the slip tolls would lead to diversions from the M1 to the junction to avoid the main toll “and would attract traffic that currently avoids the junction because of tolling”, increasing north-facing ramp flows from 3,000 to 18,800 vehicles a day.