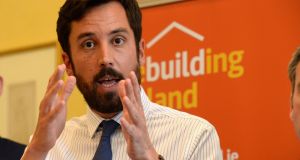 A total of 780 local authority houses were built across the State last year, according to figures published by the Department of Housing.

The figure, an increase on the 247 built in 2016, brings to 1,027 the number of local authority houses built since the Government’s Rebuilding Ireland strategy was announced, less than one-fifth of what was promised in the action plan.

Simon Coveney, who was minister for housing at the time of the plan’s publication, said in January last year there would be 13,189 “local authority new builds” during the course of the plan – from 2016 to 2020 – an average of 2,637 per year.

The 1,027 houses figure – an annual average of 513 units – were considerably lower than the 7,000  homes Minister of State Damien English said had been “built” last year at an event in Cork city earlier this month, and than the 1,014 Minister for Housing Eoghan Murphy last week said had been built in 2017.

“They show just how far off the mark the Government is when it makes claims about the number of social and affordable homes being built. It beggars belief that the Minister does not appear to even be in command of the facts on the ground.”

“Varying figures were issued over the past two weeks. The actual final figure is a fraction of the original figure quoted,” he said in a reference to the figures mentioned by the Ministers.

Every council acquired some units, with Galway City the fewest (seven), Leitrim (eight) and Galway County (10).

Some 1,757 voids were brought back into use, 543 of them in Dublin city, 168 in Donegal and 121 in Fingal. Counties Longford and Leitrim brought no voids back into use while Roscommon brought three.

Ms Murphy said the figures “clearly demonstrate why the housing crisis is getting ever worse – local authority construction is happening at a snail’s pace. We need to see a much faster delivery of new build houses as well as more ambitious local authority targets backed up [by] adequate resources.”

* This article was amended on April 26th.