Almost 120,000 applications are expected due to law change for unaccompanied learners 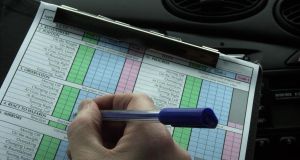 Driving test application numbers are expected to rise to up to 119,000 once legislation passes to penalise car owners who allow learner drivers out on the road by themselves. File photograph: Frank Miller.

Driving test application numbers are expected to rise to up to 119,000 once legislation passes to penalise car owners who allow learner drivers out on the road by themselves.

Minister for Transport Shane Ross said there were already almost 250,000 learner permit holders in Ireland, “many of whom are on their second or subsequent learner permit”.

He said the number of driving test applications had risen by almost 20 per cent in the past four years.

The current average waiting time for a test is 13 weeks, and the Road Safety Authority (RSA) aims to get that down to no longer than 10 weeks, the Minister said.

But Sinn Féin transport spokeswoman Imelda Munster said recent figures showed waiting times of up to 28 weeks. “It is seven months in Tralee, Cavan is next at 25 weeks, and Cork and Monaghan are at 24 weeks.”

She said she was fully supportive of Mr Ross’s legislation to deal with learner permit holders driving on their own, but she told the Minister “the buck stops with you regarding tackling delays in waiting times at driving test centres and the chronic shortage of driver testers”.

The Louth TD said the Minister should have pre-empted the increase in test applications that was “obviously going to occur” once the legislation passes. She said there was no driving test centre in Drogheda where more than 2,500 people were waiting to take a test, a figure that had quadrupled.

Mr Ross said he understood why Ms Munster mentioned the waiting times, “but I think it is probably a bit unhelpful for her to always point out the worst cases”.

The Minister said there were some places where the waiting time was less than 13 weeks and that the issue was being addressed “aggressively”.

Mr Ross also pointed out there was a large number of people who did not show up for their tests and that the efforts made by the RSA had reduced that figure by half.

He said the authority contacts applicants who have previously not shown up for a driving test and asks if they will attend. If they are not going to show up the RSA offers the appointment to another candidate.

Currently 4 per cent of tests do not go ahead because of various faults or issues wither with the vehicle or the documentation.

The Minister said the RSA employs 104 full-time driver testers, adding 28 additional testers had been recruited since October 2016 of whom 23 were in place and the remaining five would be working shortly.

A panel of 100 would also be put in place following a recent recruitment campaign, and the department is considering a plan from the RSA to recruit 67 additional testers and 17 support staff on a phased basis for between 12 and 18 months to manage the “possible surge” when an estimated 53,000 to 119,000 applications are expected once the legislation changes.