Thousands risk their lives every year along Cliffs of Moher trail 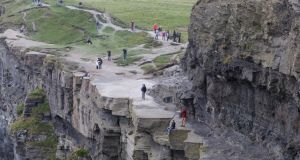 Thousands of people risk their lives every year by straying outside the bounds of an official walking trail that includes the Cliffs of Moher in Co Clare. Photograph: Press 22

Thousands of people risk their lives every year by straying outside the bounds of an official walking trail that includes the Cliffs of Moher in Co Clare.

Last Friday, 26-year-old Anand Goel, a Trinity College Dublin student from Delhi, India, died when he fell from the Cliffs of Moher as he tried to take a selfie photograph at the landmark.

Eyewitnesses saw him fall 600ft to his death from the cliffs, approximately 1km away from the Cliffs of Moher Visitor Experience.

Rangers patrol the walking trail, known as the Cliffs of Moher Coastal Walk, warning members of the public who go out of bounds. However, visitors continue to take their lives in their hands every year and leave the path to sit or stand on cliff ledges.

Some have been found with their feet dangling hundreds of feet above the ocean, while others climb down grass slopes on the cliffs, risking being swept away by the landslides that happen there occasionally.

Despite repeated warnings, dozens of people have been injured in recent years after they left the official trail, often to take photographs close to the cliff edge.

The Cliffs of Moher Coastal Walk is a 20km trail stretching from Doolin south to Hag’s Head and which includes the eponymous cliffs. It was opened in 2013. It was developed by Clare County Council, Clare Local Development Company (CLDC), the National Trails Office, Fáilte Ireland, the local community and almost 40 landowners along the route.

The trail is managed by the CLDC, except where it crosses through the Cliffs of Moher Visitor Experience area, which is where the official viewing platforms for the cliffs are located. Less than 1km of the official trail crosses through the area managed by the Cliffs of Moher Visitor Experience, which is owned and operated by Clare County Council and is now one of Ireland’s most visited tourist attractions.

Management at the centre have marked out the official boundary for visitors with clear warning signs.

The landowners along the trail are indemnified against legal actions by people who hurt themselves while using it. Ten people suffered ankle and leg injuries after they fell off the path last year alone.

In 2016, public warnings were issued after sections of the cliffs were seen falling away into the sea. Additional warning signage was subsequently erected at the Cliffs of Moher visitors’ site, including signs warning that the cliff edge was unstable.

“Signage is erected throughout the Cliffs of Moher Visitor Experience site advising members of the public to stay within the designated boundaries of the site. The entire site is monitored by Cliffs of Moher staff to ensure the safety of all visitors,” the spokesman added.

“The message is very simple, people should always stay on the official trail and should not approach the cliff edge – it is unstable. The path is safe and walkers will not be in any danger if they stay on the path.

“We also advise that people check the weather before starting on the trail. They should also wear appropriate outdoor gear (boots with ankle support, waterproof jacket, etc) and bring a mobile phone, food and water.”

Local councillor Richard Nagle said: “What happened here on Friday is a terrible tragedy and something you hope wouldn’t happen anywhere. Our sympathies are with the family of this poor young man.”

“While this was a tragic accident, I have walked the trail and have seen myself some of the things people do and where they go. The trail is very popular, with tens of thousands of people, both locals and visitors, using it every year, but there are dangers people need to be aware of,” Mr Nagle added.

Some foreign visitors from landlocked countries are not used to cliff trails, he said, adding that such visitors may also be unaware of the dangers that can be posed by quickly-changing winds.

“People should not go anywhere near the cliff edge because of the danger of ledges or overhangs falling away, because the sea and weather are always causing erosion,” he said.