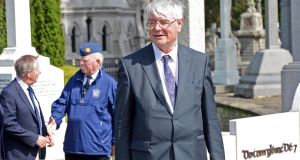 The organisers of the Soloheadbeg ambush centenary say the decision of President Michael D Higgins not to attend is a “missed opportunity”.

The Soloheadbeg ambush, in which men from the Third Tipperary Brigade of the Irish Volunteers shot dead two Royal Irish Constabulary (RIC) policemen, is regarded as the event that started the War of Independence.

It remains controversial to this day because of the suggestion by Dan Breen, the best known of those who participated in the ambush, the policemen were deliberately shot so as to start a war.

This claim was rejected by the officer commanding at Soloheadbeg, Seumas Robinson, who always maintained the constables were shot dead only after they raised their own weapons and refused to surrender.

The centenary event takes place on Sunday week, January 20th, so as not to clash with the celebrations to mark the first Dáil on the following day.

The Soloheadbeg ambush took place on January 21st 1919, the same day as the first meeting of Dáil Éireann.

The Solohead Parish Centenary Commemoration Committee said they had asked President Higgins before he was re-elected if he could attend, but he was unable to confirm because of the election. However, he stated shortly after he was re-elected that he would not be attending.

Spokesman Tim Hanly said they were “disappointed” he was not attending and did not understand the reasons why.

Mr Hanly stressed the event is not intended to be a glorification of the events at Soloheadbeg. Relatives of the two RIC men killed on the day, Constable James McDonnell and Constable Patrick O’Connell, had also been invited and some have accepted.

“We feel it is a lost opportunity because the president represents all the people and we will have relatives from both sides at Soloheadbeg,” he said. “At the same time, we respect the office of the president.”

The centenary will be marked by a conference on Saturday, January 19th, in Ballykisteen Hotel, Limerick Junction, followed by the main event on Sunday.

Historian and former government minister Dr Martin Mansergh will unveil a new information board about the ambush, followed by an oration by Fianna Fáil TD Éamon Ó Cuív, the grandson of Éamon de Valera. President Higgins is on holidays at present and a spokesman declined to state why he will not be attending.

In a series of questions to presidential candidates in advance of the election, all were asked as to whether or not they would attend the Soloheadbeg centenary.

Candidate Higgins, as he was then, gave a lengthy exposition on the principles which will inform the second half of the Decade of Centenaries though he did not answer the Soloheadbeg question directly.

He stated that the Irish public should not be afraid to “confront the often-complex regional permutations within the War of Independence, and to openly discuss the nature of the atrocities committed and the ruthlessness of executions performed by the IRA”.

He added: “We should also recall that many servants of the British state in Ireland, such as members of the Royal Irish Constabulary (RIC) and the Dublin Metropolitan Police (DMP), sought to serve their local communities.

“As an armed gendarmerie, dispersed in barracks throughout the country, the RIC represented the most visible and tangible symbols of British rule in Ireland, and were the most obvious targets for Republican raids, as well as subjects of a battle of hearts and minds.”