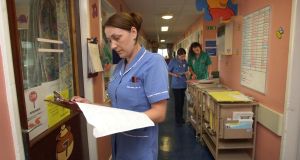 The Irish Nurses and Midwives Organisation (INMO) said there were 392 patients in need of admission waiting in emergency departments and 149 in wards on Monday. File image: Bryan O’Brien

Extending free GP care to all children aged under six resulted in more, not fewer, of them being referred to hospital emergency departments, according to a new study.

Far from cutting the pressure on hospital EDs, the measure introduced in 2015 resulted in 2 per cent more hospital attendances arising from GP referrals, the study by the Economic and Social Research Institute (ESRI) found. This was equivalent to about 3,500 extra referrals to EDs each year, or about one per family doctor.

And because these extra attendances did not lead to a rise in admissions to hospitals among young children, researchers have concluded many of these ED visits may have been “for minor ailments and may have been avoidable”.

With the Government committed to extending free access to GPs in the population with the aim of providing more care in the community, the study suggests this policy could have major economic ramifications.

The study tallies with earlier research on older Irish people that found reducing the cost of GP care had no impact on the use of EDs.

“The increased demand on GPs, the capitation payment, and greater risk aversion may be leading to GPs to more quickly refer children to the ED,” it finds. Referral rates rise at weekends when out-of-hours services dominate.

Meanwhile, the number of patients who require admission to a hospital bed waiting on trolleys in emergency departments or on wards rose to 541 on Monday, nurses said.

This jump of over 150 patients since last Friday represents a significant spike in trolley numbers, which had been lower than anticipated over recent weeks.

Minister for Health Simon Harris pointed out the figures were 8 per cent lower than on the same day last year.

“However the flu has now arrived,” he said, adding that the strain of flu being experienced in the country was H1N1 or swine flu.

The Minister said those most at risk from this strain of flu were pregnant women and those under 65 with pre-existing conditions, and he urged people in these categories to get the flu vaccine.

Mr Harris said the Government and the HSE was doing all it could to improve patient flow through hospitals.

Three more “frailty intervention teams” which work in emergency departments to try get older people home faster would come on stream on Monday.

However, Mr Harris said the health service was entering a challenging period “ as we knew we always would”.

The Irish Nurses and Midwives Organisation (INMO) said there were 392 patients in need of admission waiting in emergency departments in hospital across the country on Monday, and 149 waiting for a bed on wards .

The hospital worst hit by overcrowding on Monday was University Hospital Limerick where there were 32 patients on trolleys in the emergency department and 12 patients on wards .

There were eight children on trolleys in the emergency department at Temple Street University Hospital.

Mr Harris has attributed the reduced overcrowding over Christmas to “positive initiatives” in his winter plan, along with mild weather and lower flu rates.

However, the Irish Hospital Consultants Association (IHCA) said the lower trolley numbers seen after Christmas “must be assessed in the light of” the widespread deferral of essential surgery appointments in January.

“It is unacceptable that, in a developed economy such as Ireland, hundreds of critically-ill patients who are admitted to hospitals on a daily basis cannot be provided with a bed and are being treated on trolleys,” the group’s president, Dr Donal O’Hanlon, said.

Labour Party health spokesman Alan Kelly said the latest trolley figures were a symptom of the Government and HSE “being ill-prepared for predictable winter illnesses”.

He said: “It is disappointing that the HSE has no credible plan in place to deal with what is now looking to be an annual problem. We need to see a change of tact from Fine Gael, who have held the Health portfolio for seven years, because pumping an extra €500 million into our health service every year is not sustainable when we are seeing numbers this high lying on trolleys.

“There is a critical need to look at increasing the volume of home help hours. We have to ensure that community intervention teams can operate longer and consistently across the country. Our citizens deserve to be treated locally in their community instead of lying on hospital trolleys waiting to be treated.”