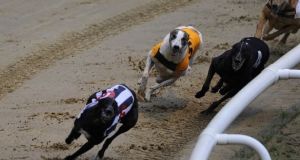 About 6,000 greyhounds are killed each year because they failed to make qualification times or their performances declined. Photograph: Alan Crowhurst/Getty Images

The Irish Greyhound Board has accused those engaged in practices exposed by the RTÉ Investigates programme of bringing shame on the industry.

In a special report broadcast on Wednesday night, the programme exposed that the industry is overbreeding by a factor of 10 and many greyhounds, who do not perform, are being shot illegally.

The programme highlighted an unpublished report commissioned by the Irish Greyhound Board (IGB)and carried out by Preferred Results which revealed that of 16,000 greyhounds are born in Ireland every year.

About 6,000 are killed because they failed to make qualification times or their performances declined.

The programme further alleged that half of the 30 licensed knackeries contacted by them agreed to illegally kill greyhounds for prices ranging from €10 to €35 each.

Subsequently undercover filming by RTÉ Investigates of the premises captured the killing and disposal of four greyhounds within a matter of days. Knackeries are not allowed to kill greyhounds.

It also revealed that doping within the industry was widespread though only one trainer has had their licence revoked by the IGB because of doping issues, that was in 2015.

Veterinary surgeon Finbarr Heslin told the programme: “We see dogs who come in and they’ve had so much EPO (erythropoietin ) pumped into them that their blood is like treacle.”

In response the IGB said the Preferred Results report referenced was published in 2017 and since then the Greyhounds Racing Act 2019 has been signed into law.

The board claimed the industry was making “significant progress in the areas of welfare and regulation under its strategic plan 2018-2022”.

IGB chief executive Gerard Dolland said in response to the programme: “Any person who knowingly harms a greyhound brings shame upon our industry. The IGB will continue to investigate any matters brought to its attention.

“Thousands of greyhound owners across the country treat their dogs impeccably before, during and after their racing life. The IGB continues to target the ultimate aim of total re-homing of retired racing greyhounds.”

IGB chairman Frank Nyhan said the new act will allow the industry to progress and modernise.

He said: “When the act is in full effect, it will add to existing legislation and ensure that the racing greyhound is the most regulated of all canine breeds in Ireland.”

The Minister of State at the Department of Agriculture, Food and the Marine Andrew Doyle said his department “takes any allegations of breaches of animal welfare rules very seriously and will thoroughly investigate and take the necessary enforcement actions to deal with such offences”.

He said the new act signed into law last month gives the IGB enhanced powers to make regulations for the traceability of greyhounds.

He said the department is engaging in a review of the licensing conditions in knackeries following the RTÉ revelations.

He added: “The regulations will support the board in its ambition to establish and maintain a new comprehensive tracing database for racing greyhounds and provides greater powers to deal with areas such as anti-doping, integrity and sanctions.”