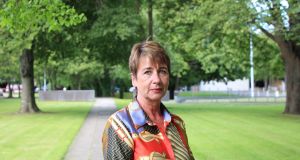 Majella Moynihan: has received apologies for her treatment in the 1980s for becoming pregnant by another garda. Photograph: RTÉ

The Garda has identified and is actively investigating a number of cases similar to that of Majella Moynihan, the former Garda who faced dismissal over the birth of her son outside of marriage, Garda Commissioner Drew Harris has said.

Mr Harris and Minister for Justice Charlie Flanagan have issued apologies to Ms Moynihan, who was charged in the 1980s with breaching the force’s disciplinary rules for having premarital sex with another garda, becoming pregnant and having a child.

Transcripts from an internal Garda hearing from the time revealed an aggressive line of questioning of the then 22-year-old woman by senior male officers, scrutinising her sexual history and use of contraceptives.

Mr Harris, appearing before the Oireachtas justice committee on Wednesday, said a trawl of Garda files had revealed other cases, including where male Garda members were disciplined for impregnating unmarried women.

“In respect of the documentation, we do have files,” he said. “There are cases which do bear similarities in respect of unmarried female Garda members. It’s been recorded on discipline files in respect of pregnancy outside wedlock.

“There does seem to be a limited number. Those are files that were retrieved from electronic storage. Various paperwork has been provided over time. It’s a very voluminous amount of paperwork so it’s hard to say if it’s a full amount.

“We have actively and are actively looking for similar cases. I don’t have a definitive number. Another aspect of this was that male members were also subject to discipline and boards of inquiry for getting unmarried girls pregnant.”

The commissioner added that the force has not made contact with the women or men involved in the cases identified.

Separately, Mr Harris spoke about setting up a “women garda network” to provide “peer support to women in the force, guidance and mentoring, particularly to those moving through promotions”.

Mr Harris also addressed the issue of the Garda budget and resources, and said the force was “called upon too much” to carry out functions that would be more appropriate for other arms of the State.

“We need to get back to our core functions,” he said. “We are called upon too much to support other functions of government.

“Often, the very last public service on the ground is ourselves. We are not the appropriate organisation to make particular interventions, such as in relation to mental health for example. We are entirely the wrong organisation for that.”

Asked whether the Garda budget was sufficient, Mr Harris said: “It could certainly be more sufficient . . . Our budget is under pressure. We are at a slight overspend.

“We have to apply rigorous control over it. It requires new approaches to deployment and how we manage some events. Resources are too precious to continue doing things the way we’ve always done them.”

On the issue of policing the Border region in the event of a hard Brexit, and the emergence of separate customs arrangements between the North and the Republic, Mr Harris said the force was expecting an increase in smuggling and terror-related activity.

“Threats will arise,” he said. “One will be in and around organised crime. Tariffs will mean there will be scope for smuggling in goods. As we approach Brexit, we are conscious of the fear that there might be raiding backwards and forwards.”

Mr Harris said the Garda would have to monitor the “increased threat of terrorism” which meant the Border region would need additional resources in the form of “more road patrols and personnel from the Armed Support Unit, and we are doing that”.

On Garda reform, and in relation to “circles and cliques in relation to promotions”, Mr Harris said he wanted “to make sure our competitions are fair”. On female members applying for promotions, he said the force has “good representation”.