‘There were flying slates which would cut the head off you’: TDs respond to Ophelia 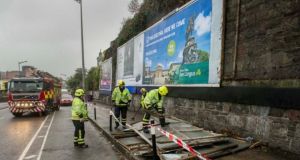 Schull-based Independent Cork South-West TD Michael Collins was one of the many public representatives up early on Monday in anticipation of a long day helping constituents deal with the fallout from Hurricane Ophelia.

He feared the worst when, in the early morning, wind speeds of more than 133km/h, rising to 190km/h, were recorded at Fastnet Lighthouse.

The storm was at its worst from then until around midday, he said.

Mr Collins said it was the worst he had seen in his lifetime.

“Thankfully, there was no loss of life down here,’’ he added. “Ophelia is surely one tough woman.’’

Power was lost as electricity lines came down and fallen trees became a problem in roads throughout west Cork.

Twelve trees were felled in a stretch of road in Skibbereen, he said.

“It was all very dangerous,’’ he told The Irish Times. “There were flying slates which would cut the head off you.’’

He said people were trapped in their homes because fallen trees had blocked driveways and they were unable to reverse their cars on to the roadway.

Although the storm started to abate about midday, he estimated that considerable damage was done and that it might take some time to make all roads passable again because of fallen trees.

Like others, he observed people stocking up with food on Sunday in anticipation of shortages caused by the storm.

“Shopkeepers told me there was not a loaf of bread to be found on a shelf,’’ he said.

Some TDs were keeping in touch with each other throughout the day.

In Kerry, Independent TD Michael Healy-Rae received a telephone call from Minister of State for the Office of Public Works Kevin “Boxer’’ Moran at 6.20am for a briefing on what was happening in the south.

Mr Moran was on his way from Westmeath to Dublin for a meeting with Taoiseach Leo Varadkar and Ministers to discuss the crisis caused by the storm.

Mr Healy-Rae said Minister for Transport Shane Ross had been in touch with him via text messages on Sunday night.

The Independent TD opened his Kilgarvan supermarket at 6am, in defiance of the storm, but was forced to close at midday because of a power cut.

He said he was particularly concerned about the elderly and those living in isolated locations.

“I have been in touch with nursing homes and I’m told everything is going to plan in terms of providing hot food and appropriate care,’’ he said.

As elsewhere, he was dealing with reports of fallen trees and loss of power.

“It is very difficult for people, but I think all the services, local and national, have responded well,’’ he added.

Fianna Fáil TD for Waterford Mary Butler assisted neighbours in Brown Street, in her native Portlaw, where the strong winds lifted sections of roofs in a row of terraced houses.

“The roof was lifted from a derelict house and it caused a domino effect on the other houses,’’ she said.

“There is flying debris and flying fascia boards, and people are understandably distressed.’’

She said cars were moved from near the houses to avoid damage.