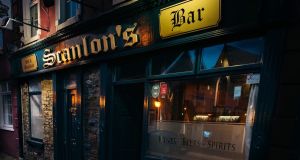 John Scanlon is the third generation of his family to run Scanlon’s Bar in Newmarket in north Cork. He and his parents, Michael and Joan, who run the pub with him, have never seen anything like the coronavirus crisis.

“My late grandparents, John Joe and Joan Scanlon bought the pub in 1976 – it was Lane’s Hotel before we bought it and it goes back to the early 1900s but no one can remember anything like this sort of a shutdown.

“The only time we ever close is Christmas Day and Good Friday – we’re still closing on Good Friday despite the change in the licensing laws but today is our 37th day closed now and we’ve never seen anything like that before.”

John says the pub would usually have good trade at weekends, attracting people from Newmarket and surrounding areas.

“We’d have a good broad range of customers – our age profile would be from 18 to 80 and older and talking to some of the older customers who are cocooning, they are finding the lockdown and the social isolation difficult.

“I can imagine people living by themselves finding it massively difficult – having contact with people is huge – 95 per cent of people who come into us come in for the chat and the social aspect, the drinking is secondary for a lot of them.

“We would have some fellows living alone – they might be working on a farm or whatever and they would come in and you’d know they wouldn’t be in for the drink, they’d come in for the chat.

“Some fellows might come in and you could have a bunch of them sitting in the corner and you’d know the crack and routine of fellows and with that no longer around, it must be difficult for people, mental health wise.”

For John and his parents who live adjacent to the pub, it’s an eerie feeling seeing the bar cloaked in darkness every night rather than hearing it buzzing to the sound of people enjoying themselves.

John says his main suppliers, Diageo and Heineken Ireland, have both been supportive to the trade.

“We had just got in our St Patrick’s Day stock from both Diageo and Heineken when the government announced the shutdown – the Friday night of St Patrick’s weekend was decent enough but the Saturday was quieter.

“And then of course we lost out completely on St Patrick’s Day which would be a big day for us in a town like Newmarket with people coming in after the parade and maybe to watch a match so we lost out on a lot of trade that day.

“But both Diageo and Heineken have been very good – they credited our accounts that Monday after the closure for the kegs they gave us – we cleaned the taps but they came around and cleaned the taps as well, to be fair.”

Others too have been supportive with Sky Sports delaying their subscription charges while Cork County Council delayed the collection of rates but he fears it may all ultimately make for a perfect storm.

“All three of us working here, myself and my parents are getting the Covid-19 payment which is a help but I don’t know how long the Government is going to be able to keep paying that to people.

“And of course, the longer pubs are closed, it’s going to become more difficult to reopen and whenever you do, you could be hit with all these delayed payments together and people with cash-flow issues could be in real trouble.”

“It’s the snowballing effect worldwide that’s most worrying, along with the uncertainty of all it – we know people’s health has to be the priority and rightly so but if there was an end in sight, you could plan but there’s no certainty.

“Simon Harris’s comments at the weekend that people should not expect a significant lifting of restrictions were a bit out of the blue – did he jump the gun or was he simply telling it as it is but it didn’t make for pleasant reading.”

John says there is “no blueprint” for how it will all play out but he’s hopeful that even if pubs have to implement social distancing in the future, he and other publicans will be able to resume business sooner rather than later.

“I can see people going back out socialising when this is over – it won’t be on the scale it was, at least not for a while, and they’ll be wary of social distancing but it might be easier in rural areas where you don’t have the crowds.

“Hopefully as publicans, we can create a safe environment to bring people in again – the days of people standing shoulder to shoulder in pubs may be gone but we still need to create an atmosphere for people to enjoy a social drink.”

4 Donnelly admits unlikely 700,000 people will be vaccinated by end of March