Re-opening pubs would be ‘at odds’ with distancing measures, says Holohan

Chief Medical Officer Dr Tony Holohan has said that an evaluation will be made towards the end of April as to what might happen with regard to lifting Covid-19 restrictions from May 5th. Video: RTÉ 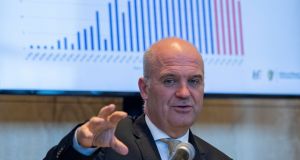 The deaths of 77 patients diagnosed with Covid-19 have been reported on Monday by the National Public Health Emergency Team (NPHET).

Some 67 of the deaths were in the east, four in the north-west, four in the west and two in the south. A total of 54 of the patients were reported as having underlying health conditions.

Of the 77, 31 were men and 42 women, while there was no notification of gender for the other four people. The median age was 84 years.

There have now been 687 Covid-19 related deaths in the Republic.

The median age of confirmed cases was 48 years and 2,272 people were hospitalised - 15 per cent.

Of those hospitalised, 309 were admitted to ICU.

The number of cases associated with healthcare workers now exceeds 4,000, standing at 4,009.

Of those for whom transmission status is known, community transmission accounts for 62 per cent, close contacts for 34 per cent and travel abroad for 4 per cent.

He said the percentage increase in cases, ICU admissions and deaths had decreased over the last period of time.

Dr Holohan said further progress in reducing the number of cases and ICU admission would be needed over the next 10 days before an evaluation would be made as to whether restrictive measures could be eased.

“We need to take every step we can possibly can” to continue dampening down the infection. “There is no room for complacency, or for taking the foot off the gas.”

Asked when pubs might re-open, Dr Holohan said their environment was “almost at odds” with the challenge of maintaining social distancing.

Research conducted for the Department of Health shows 54 per cent of people say they are missing contact with family and friends, while nine out of 10 people say the measures imposed by the Government are appropriate.

Some 90 per cent of people say they are staying at home as directed and practising social distancing in a queue. Some 94 per cent say they are hand-washing appropriately and 77 per cent report following the directions for coughing into the elbow.

NPHET says for the first time people are starting to feel the worst of the pandemic is happening now (52 per cent), with only 26 per cent the worst is still to come.

Of the 687 deaths so far, 348 occurred in hospitals and 45 of these patients were admitted to ICU. Some 82 per cent of patients who died had underlying conditions. The median age was 83 and the mean age 69. The male/female breakdown was 55 per cent/45 per cent.

The number of patients in ICU is 152, slightly down on previous days, while 109 patients have now been discharged from intensive care.

The median age of ICU admissions is 60 and 82 per cent had an underlying condition.

A total of 1,761 confirmed cases have been reported in long-term residential facilities, or which 1,204 occurred in nursing homes.

Long-term residential facilities account for 406 of the deaths that have occurred, including 77 probable or suspected death.

Nursing homes account for 337 deaths, including 61 probably or suspected deaths.

In Northern Ireland, another 13 deaths from the coronavirus were announced on Monday, bringing to 207 the total number of people with Covid-19 to have died in hospital.

Mr Swann said modelling showed a worst-case scenario of 1,500 deaths in the first 20 weeks of the epidemic in Northern Ireland, covering hospitals and the community.

“This is a significant revision on the previous modelling. This is not a prediction or a forecast. “It provides a clear indication that social distancing is working. It provides encouragement to everyone who is working hard to do the right thing.”

The initial, worst-case estimate had been 15,000 deaths, which had already been revised down to 3,000 before the latest downwards reduction.

On Monday, the UK reported a further 449 deaths in hospitals as the number of confirmed cases passed 124,000.

A total of 16,509 people who tested positive for coronavirus have died in hospitals in the UK, the health ministry said on Monday.

The number of confirmed cases of the new coronavirus has risen to 124,743.

In Spain, the number of people diagnosed with the virus, also known as Covid-19, has surpassed the 200,000 threshold, the country’s health ministry said on Monday.

Several European countries have begun easing restrictions on movement, with shops up to 800sq m, as well as car and bicycle dealers and book stores opening in Germany on Monday.

Varadkar accused of naivety over ‘Covid penalty’ on mortgage holders 14:26
Learner drivers could be forced to take driving lessons to renew permits 13:20
Covid-19: Small minority of pubs putting health of customers and staff ‘at risk’ 13:05
Six counties had no Covid-19 case over past week 12:51
Aldi Ireland aims to cut plastic packaging by 50% by 2025 12:38