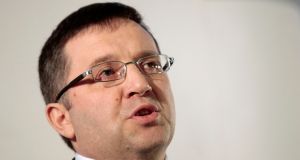 Northern Ireland’s health minister Robin Swann: the new death figure of 1,500 is a “significant revision on the previous modelling total” of double that. Photograph: Peter Morrison/PA

The number of people now expected to die in Northern Ireland from the first wave of the coronavirus outbreak has been revised down to 1,500, following the recording of 13 hospital deaths on Monday.

So far, 207 people have died there in hospitals, though the numbers succumbing in nursing and residential homes are not reported daily, as happens in the Republic.

Forty people are now in intensive care beds because of the virus, while 88 more people were admitted to hospitals on Sunday, Northern Ireland’s health minister, Robin Swann, said.

The most recent modelling advice indicates that “under the reasonable worst-case scenario we would be looking at in the region of 1,500 deaths in the first 20 weeks of the epidemic”, he said.

That figure is half the number predicted on April 1st, while the original assessment a month ago warned that up to 15,000 could die in Northern Ireland in the “worst-case nightmare scenario”.

Saying the new figure of 1,500 is a “significant revision on the previous modelling total”, Mr Swann cautioned, however, that it was “not a prediction or a forecast” but a “clear indication that social distancing is working”.

He warned that “complacency will kill” and said that “thinking this is over or that the risk is diminishing will cost lives”.

The chief medical officer, Dr Michael McBride, said it would be “premature” to suggest Northern Ireland was “through the worst” of the coronavirus outbreak.

The relaxation of social distancing measures, or the failure to adhere to the ones in place, would “rapidly see a re-emergence of this virus and we will then see the health service come under pressure”.

Saying that it is equally premature to talk of exit strategies, Dr McBride warned that “social distancing will be with us for a significant period of time”.

Meanwhile, Mr Swann did not rule out the reuse of personal protective equipment (PPE), after health workers and unions raised concerns over official coronavirus guidance from Public Health England which approved the reuse of PPE where there are acute shortages and where it is safe to do so.

NI’s Department of Health “has not asked anyone to reissue or reuse PPE, but there may become a point when we do so. I hope it doesn’t happen,” he said. Everyone is working “strenuously to avoid this”.

Moving elderly people currently living in care homes into hotels in order to protect them from coronavirus outbreaks is “not a route that we are currently going down”, said Mr Swann.

While “nothing was off the table”, he said, “at this moment in time we have no intention of using hotels to replace the accommodation and support that is provided in care homes”.

She also said measures had been put in place to cover coronavirus-related absences among staff in care homes, including directing some new healthcare recruits directly into the care sector.

A number of new testing measures were announced on Monday by the chief medical officer. From this week, there will be random testing of individuals who present at GP surgeries with respiratory symptoms, and from April 28th, there will be similar testing at emergency departments.

All patients who are being transferred from hospitals to care homes will also now be tested before discharge.

More than 1,000 businesses in Northern Ireland applied for help from a £25,000 business grant scheme open to the retail, hospitality, tourism and leisure sectors after the online application form was launched on Monday.

The website was unavailable for a time due to a “technical issue”, but is now working normally.