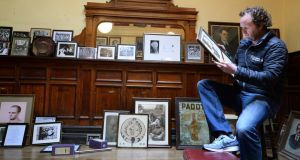 Willie Ahern, of Palace Bar on Fleet Street, Dublin, cleaning up in the closed pub during the coronavirus lockdown. Photograph: Dara Mac Dónaill

Irish poet and novelist Patrick Kavanagh once described the Palace Bar on Fleet Street in Dublin city centre as the “most wonderful temple of art”.

The pub, an old haunt for journalists and literary figures, is now boarded up alongside thousands of others across the country due to Covid-19 restrictions.

Willie Aherne, owner of the pub, reflects on whether or not his business can endure if pubs remain closed until a vaccine is found.

“Please God we will survive here, but there is going to be a lot of casualties in terms of elsewhere,” he says.

The Palace Bar opened in 1823 and has been in Mr Aherne’s family for three generations. It was bought by his grandfather Bill Aherne, from Rearcross, Co Tipperary, in 1946. His father, Liam, then took over in 1978 and Willie has been running the pub for the past five years.

Minister for Health Simon Harris said at the weekend he could not see how people could return to “packed pubs” as long as coronavirus was still in the community and in the absence of a vaccine.

“It’s scary,” Mr Aherne says. “The Minister mentioned this yesterday but you had a feeling all along because you can see what’s happening around the world.

“There’s a lot of old Dublin pubs, like the Palace, which are narrow, small. It’s very hard to impose social distancing, also for your staff who are working behind the counter.

“Then if you’re restricted in your capacity, say a quarter or 30 per cent of your capacity, you’d have to honour all your financial commitments. I just don’t know, for a lot of places it just wouldn’t make sense.

“It really is a minefield, there are so many questions that need to be thrashed out.”

Mr Aherne says that although the Government’s temporary wage subsidy scheme and unemployment payment have helped staff, there “has to be something for small businesses to survive”.

“I would like the Government to liaise with the hospitality industry and maybe set up a task force on the workings of this over the next three to six to 12 months,” he says.

“We probably have 20-25 suppliers that we deal with; apart from the likes of Diageo and Heineken, you have small little independent craft breweries, small suppliers.

Mr Aherne says to date he has been “working well” with his bank and suppliers, but there has been “no support” from the insurance industry for businesses.

“Our insurance premium is quite substantial, it is huge, year on year, and I’m in the process of renewing mine at the moment,” he says.

“From all walks of life, not just the bar trade – all businesses – it’s about survival at the moment and it’s going to be survival to try to get us into the end of this year or 2021.”