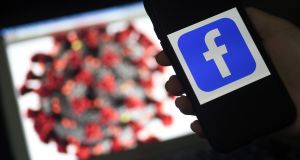 The survey questions people on potential Covid-19 symptoms they may be experiencing, such as fevers, coughing, shortness of breath or loss of smell. Photograph: Olivier Douliery/AFP via Getty Images

Facebook is rolling out a global survey on coronavirus symptoms that the company will use to help support researchers responding to the Covid-19 pandemic.

The opt-in survey is part of the social network’s Data for Good programme, and is an expansion of the initial US-focused survey the social network began earlier this month run by health researchers at Carnegie Mellon University.

The survey questioned people on potential Covid-19 symptoms they may be experiencing, such as fevers, coughing, shortness of breath or loss of smell. The global rollout of the survey is being carried out in partnership with the University of Maryland.

“Better data can help governments determine where to send resources such as ventilators and personal protective equipment – and eventually which areas are safe to start opening up again,” Facebook chief executive Mark Zuckerberg wrote in an op-ed piece published in the Washington Post and republished on Facebook.

“Getting accurate county-by-county data from across the United States is challenging, and obtaining such focused data from across the whole world is even harder. But with a community of billions of people globally, Facebook can uniquely help researchers and health authorities get the information they need to respond to the outbreak and start planning for the recovery.”

The survey is intended to help predict how many cases hospitals are likely to see in the days ahead, provide an early indicator of where the outbreak is growing, and show where efforts to flatten the curve are paying off.

Responses are sent directly to the researchers rather than funnelled through Facebook.

Mr Zuckerberg said the results from the initial US study were “promising”, correlating with public data on confirmed cases. “This is work that social networks are well-situated to do. By distributing surveys to large numbers of people whose identities we know, we can quickly generate enough signal to correct for biases and ensure sampling is done properly,” Mr Zuckerberg said.

Facebook has also produced a number of disease prevention maps to help fight the global pandemic. Co-location maps show the probability of people in one area coming into contact with people in another; movement range trends will show if people in a region are staying home or travelling to different parts of a town; while the social connectedness index will map friendships across states and countries.