Online poker is booming during lockdown – but beware of pitfalls 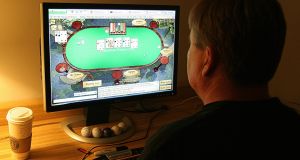 Online poker is seeing somewhat of a boom due to coronavirus lockdown. Photo: Karen Bleier/AFP via Getty Images

Friday and Saturday nights in with no pubs, cinemas or anywhere else to go to are becoming more of a challenge the longer this lockdown goes on. Books, Netflix, podcasts and the like are all well and good but after a while the boredom requires new ways of being satisfied. And that’s where, for those of us looking to satisfy a competitive itch, online poker comes in.

Unsurprisingly business for online poker websites has increased since lockdown measures were introduced in the majority of countries around the world.

The Stars Group is an online gambling company with numerous websites mainly offering poker and online casino games as well as some sports betting.

Interestingly, The Stars Group recently received clearance to complete a merger deal with Flutter – the parent group that owns Paddy Power and Betfair – to create one of the world’s biggest betting companies and further extend Flutter’s already sizeable stake in the hugely lucrative US market where betting rules have been relaxed in recent years. Therefore creating a whole new pool of hundreds of millions of potential customers.

888 Holdings, which is another major company in the online poker world and which welcomed one million new customers in 2019, said last week that a surge in business lately has led them to increase their surveillance of potential problem gambling.

“We continue to recognise that, with people spending more time at home and with increased levels of stress and economic uncertainty, 888’s unwavering commitment to preventing gambling related harm is even more important than ever,” they said.

“We are proactively communicating with our customers to provide information on safer gambling and, where necessary, offer support.”

Across the world live sport has been halted for the foreseeable future and while virtual markets offered by most bookmakers as well as the small amount of sport that is still actually going on in places like Belarus and Nicaragua gives customers something to bet on, there is little doubt that online poker is booming.

The quicker the game, the quicker you can bet. You can even increase the speed in the game settings if it’s not quite rapid enough for you

Weekly or monthly poker games between friends with a few drinks have had to migrate online and while that might seem like a handy alternative, there are plenty of pitfalls.

Our group’s website of choice a few weeks ago was Poker Stars which is part of The Stars Group. After downloading the programme to the laptop and quickly signing up, you have the option to set up a private club to which you can invite friends to play games.

It was all very simple and quick and before you know it you’re playing. None of us would be big poker players by any stretch of the imagination, more the type to play occasionally for €10 a head whenever enough of us could be in the same house at the same time on a Saturday night. But online poker is very different to a casual game where you actually sit around a table with other people.

It’s far quicker, for a start. There’s no messing about shuffling and dealing out cards and there is no working out at the end of each hand who the winner is. The computer does it all for you and, unsurprisingly, it does it very quickly. The quicker the game, the quicker you can bet. You can even increase the speed in the game settings if it’s not quite rapid enough for you.

Whereas a game in real life with five or six players might go on for a few hours, playing online it’s over in around an hour or so. Hands finish and cards are dealt out in seconds. After weeks of lockdown, you finally feel some competitive juices flowing.

The minimum deposit limit on Poker Stars is €10 so you key in the card details, the money instantly appears in your account and away you go. After the game the money goes into the account of the winner, in this case €50.

However, that’s when potential problems can begin. For a start you cannot withdraw your own money from your own account until 48 hours after your last deposit which is a long time to have that money sitting there, tempting you to ease the lockdown boredom by playing in the thousands of public games which are going on all day and night. Depending on what method of payment you use there can also be a minimum withdrawal amount which in some cases can be as much as €100.

It’s a common theme among online gambling companies that withdrawing money is far harder than depositing money. On the vast majority of bookmakers’ websites you can empty the full contents of your bank account into your betting account in seconds but, if you want to take even €10 out, you’ll be waiting three to five days for it to reach your bank account. What’s more, all the while during that time there will be a big button on the screen with the option to cancel your withdrawal which immediately puts the money back in your betting account.

The ease at which you can lose money and the difficulty of getting your hands on any money you’ve won couldn’t be any more stark.

But the other surprising, and potentially dangerous aspect of all of this, is that not once were any of us asked to verify that we were over 18 after signing up to Poker Stars. It was a simple case of keying in a date of birth, connecting your card to your account and away you go.

As with most gambling legislation in Ireland, the exact laws around age verification are hazy. When a customer signs up to a betting website they are generally contacted within 72 hours with a request for a photograph of their passport or driver’s licence to prove that they are of a legal age to bet.

The fact that there is no gambling regulator in Ireland and any potential introduction of one looks to be even further down the line given the current crisis will only further delay the Gambling Control Bill, which has already been stalled in the Dáil since 2013, makes age verification pretty easy to get around in a lot of cases.

And indeed, in this case, there was none at all despite the fact that all five of us deposited money into accounts. When contacted by The Irish Times about the lack of age verification, Poker Stars said that they could not comment on specific accounts due to GDPR regulations but that they can “assure you that as one of the most licensed online gaming companies in the world, with licenses or applicable approvals to operate in 24 jurisdictions, we will always seek to comply with the licensing requirements of the jurisdictions in which we do business. Responsible gaming and age verification are critical components of that. The welfare of our customers always comes first.”

Age verification is just one of the areas that the gambling commission is tightening up on in the UK as part of a general revision of online gambling regulation overseen by the Conservative government. Since last May, the 72-hour window to verify a customer’s age has been scrapped and websites must now seek proof of age before a deposit can be made. The banning of online gambling using credit cards is another move brought in in the UK recently while in Ireland customers can still use a credit card and can still sign up to a betting website, deposit as much as they like and bet away until they are asked for proof of age which often only comes when they look to withdraw any winnings.

Back in January Fianna Fáil announced in their election manifesto that they plan to introduce a gambling regulator in Ireland with strict legislation to stop gambling on credit cards while also imposing a new ‘whistle-to-whistle’ ban which would outlaw betting during a sporting event.

Given that live in-play betting is the main driver of profits for most online bookies – for instance it accounted for 79 per cent of Bet365’s betting revenue in 2019 – that proposal from the party which now looks set to go into government with Fine Gael seems fanciful at best.

Gambling regulation has long been down the list of priorities for governments in Ireland even though we’re now many years into the online gambling boom. And while Fianna Fáil’s plan would potentially tackle many problem areas, following the lead of the UK in tightening the rules around age verification would at least be a first step towards protecting younger people from some of the dangers.