Theft of flowers from graves ‘lowest of the low’ 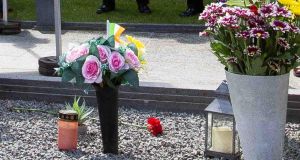 Flowers are taken from graves more often in the days leading up to Christmas, Mother’s Day and Father’s Day. Photograph: Tom Honan

People who steal floral arrangements and wreaths off graves have been described as the “lowest of the low” by a leading Dublin funeral director who warned that such thefts are likely to spike as Christmas Day nears.

Mary Cunniffe of Massey Bros in Templeogue and a former president of the Irish Association of Funeral Directors said that although it is hard to fathom how anyone “could stoop so low as to steal off the graves of the bereaved” it is “common enough”.

She warned the days leading up to Christmas and both Mother’s Day and Father’s Day are when thefts peaked.

“We hear of stuff going missing from graves fairly regularly,” she said. “It really is the lowest of the low and virtually impossible to stop. There is no way to police it as cemeteries are open to the public and people come and go all the time and there is no security.”

She was speaking after reading a letter to this newspaper from a woman who has repeatedly had flowers, plants, wreaths and pots stolen from her parents’ grave in Bohernabreena Cemetery in south county Dublin.

In the letter, Bernadette Brady from Rathfarnham said people “without a modicum of conscience or decency cash in on the hard work and efforts of grieving families” by stealing “new pots, plants, wreaths and any other seasonal items placed on graves”.

Ms Brady’s father died in 1989 and her mother passed away in 2017. Speaking to The Irish Times. she said her parents’ grave had been “plundered” for the fourth time this week when ceramic pots planted with seasonal flowers were stolen along with a Christmas wreath.

She said her parents both loved gardening and did not like the idea of a gravel-covered plot so she laid topsoil instead.

“The first Christmas after my mother died I put four wreathes on their grave and they were all taken. Both my parents were Leinster supporters but when I got them blue ceramic pots planted with flowers they were gone within days as well,” said Ms Brady.

She has spoken to other families who have had graves similarly plundered. “I’ve met people in their 90s crying with their husbands or wives in the ground and their graves destroyed,” she said.

“Apparently people just take them to sell at car boot sales. It rips your heart out all over again. I know it sounds pathetic that a woman of my age would get into her car and cry her eyes out over something like this but taking care of their graves is all I can do for my parents now. And the thieves don’t just steal what I leave, they destroy the place.”

Ms Cunniffe expressed dismay that such things could happen and pointed out that families put a huge amount of effort and thought into maintaining their loved ones’ graves “especially at this time of year”.

She said people frequently buy expensive floral arrangements and wreaths “and sometimes order them months in advance, almost as a present for their loved ones. And to see them just disappear is absolutely heartbreaking.”

Bohernabreena Cemetery is owned by South Dublin County Council. The council had not responded to queries at the time of writing.

EU will keep a seat free for UK after Brexit, says Varadkar