Taoiseach warns against move towards united Ireland after vote 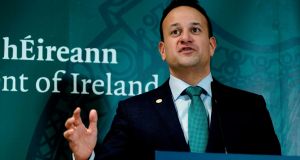 Leo Varadkar in Brussels on Friday. The Taoiseach said Boris Johnson had a ‘very strong personal mandate. . . It’s up to him to decide how he wants to use it.’ Photograph: Kenzo Tribouillard/AFP via Getty Images

Taoiseach Leo Varadkar has said a “bare bones” trade agreement between the EU and the UK may be possible late next year if a full trade agreement cannot be negotiated in time, as most EU leaders expect.

EU leaders attending the summit in Brussels acknowledged that the UK would now leave the EU in January, but most do not believe a trade agreement can be agreed before the transition period ends next December – raising the prospect of another “cliff edge” in 12 months’ time.

However, speaking to journalists after the conclusion of the summit, Mr Varadkar said it “may be possible to put together some kind of bare bones agreement to cover some aspects of it”.

He said this would “not be ‘no deal’ in the sense that we used to talk about no deal” because of the guarantees in the withdrawal agreement.

Earlier, Mr Varadkar warned against moves towards a united Ireland in the wake of Northern Ireland result, which saw unionist losses and gains for nationalists and the Alliance Party.

Mr Varadkar said while the “tectonic plates” were shifting in the North, the focus should be reviving the powersharing institutions, rather than pushing for a united Ireland.

He said there was now “no unionist majority, no nationalist majority and an ever-expanding centre ground”.

On Brexit, Mr Varadkar said that he agreed with French president Emmanuel Macron who told the council meeting there should be “no quotas, no tariffs and no dumping” – referring to the need for the UK to uphold European standards of worker protection and product standards if it was to benefit from open access to the European market.

“That’s the kind of space we’re in as the European Union,” Mr Varadkar said.

Asked “which Boris will turn up” at talks, Mr Varadkar said he had met Mr Johnson on a few occasions and they had spoken a lot on the phone “but I certainly can’t read his mind, nor do I know his mind”.

“But if I had to guess, I think he is somebody who is an economic and social liberal. And he’s somebody who is going to want to have a close relationship with the European Union, and will want us to have a trade deal as close and also a future relationship that goes beyond trade into an economic partnership, citizens rights and also a political partnership too. But that all remains to be seen.”

He added that Mr Johnson had a “very strong personal mandate . . . It’s up to him to decide how he wants to use it.”

Mr Varadkar said Ireland would be an advocate in Europe for the UK to have a close economic and political relationship with the EU – “but with the absolute caveat that it can never undermine the European Union”.

“We’re in a different place and we’re in a more vulnerable place in a lot of ways, so we need to maintain our place at the centre of the European Union – but also we need to maintain a close relationship with our nearest neighbour. So that’s going to be a challenge, but I think it’s one we can navigate,” he said.

The Taoiseach said that would be difficult because the interests of EU countries would diverge in the trade talks.

“So we need to stick together and we need to maintain solidarity and unity, and that’s what we intend to do.”