When the music stopped: Ticketmaster hits sour note over refunds

Three readers tell of issues they experienced with company 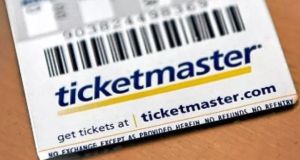 Ticketmaster sells a huge percentage of concert tickets in Ireland

Concerts and other live events have been virtually wiped out over the past 12 months, so it is hardly surprising that we get queries in connection with Tickemaster, the company which sells such a huge percentage of tickets in Ireland, but not all of them are related to Covid.

Early in December, John Mee went to the Ticketmaster site to buy a weekend ticket for this summer’s Longitude music festival for his son. Bear in mind this was before the third wave of Covid, so he could have been reasonably optimistic about the year ahead.

“The process appeared to progress fine until near the payment stage,” he says. “Things were taking longer to load and after entering our payment details, the process eventually timed out. There was a button to join the queue again and we did that. Again the process timed out.”

He rejoined the queue again and tried numerous times and the process either timed out, refused the Visa credit card or ended with a cryptic error message.

“Because it is a popular event, we imagined that the tickets would sell out pretty quickly. We tried another time but opted to purchase a ‘resale’ ticket. These are tickets that have been bought by someone else but for whatever reason, they can not use them – so they are recirculated within the Ticketmaster system,” he says.

He noted that throughout all the attempts to buy a ticket “that the default quantity was set to ‘2’ tickets. While going through the process of buying these “resale” tickets, I neglected to reset this to ‘1’. Lots of people got caught out by this.”

Eventually, the process “went through” and it looked like he had a ticket for his son – well two tickets as it turned out. “Just then a ticket appeared in my son’s Ticketmaster account. It looked like one of the previous attempts to buy a regular ticket had eventually gone through – even though we hadn’t actually completed any transaction other than the one for the resale tickets.”

He contacted Ticketmaster via DM on Twitter to resolve the matter and was told they can “amend tickets purchased through the general sale of tickets on the website but all resale ticket purchases are final” – even though the resale tickets were bought through their website.

The long and the short of it was that our reader and paid €226 for one “regular” weekend ticket and is happy to keep this. He also paid €523.78 on the same day for two “resale” weekend tickets, which he stressed are not wanted or needed. “Surely there is an onus on Ticketmaster to ensure that their ticketing system is fit for purpose and if it does not work properly for the customer, then that customer should not be out of pocket.”

Next up we have David Carney. Last March, he bought two tickets to see Genesis who were due to perform in Dublin last November. He says that when Covid-19 broke out he sold the tickets through the Ticketmaster ticket resale platform .

“The tickets were listed for sale on April 19th and sold immediately. The rules of the resale (which were not clear at that time but subsequently became very clear) were that I would be paid 10 working days after the concert was to be held. That would have been fine if not for the fact that the concert had been rescheduled twice already due to Covid-19. It is now due to be held on September 15th, 2021, and most likely will not happen then either.”

He says he contacted Ticketmaster in April and was told he could not stop it or get his tickets back. He outlined Ticketmaster’s own policy which stated in certain circumstances at its discretion it could cancel the sale.

“I asked for a review of the sale and asked for the name and contact details of member of staff who could deal with this issue. I also asked under what legislation were they allowed to keep two sets of money for the same two tickets. All I ever got was a reply with a list of rescheduled concerts.”

He says he acknowledged that he offered the tickets for resale and signed up to terms and conditions, but says he has a real issue with the fact that Ticketmaster has his initial €235, which he paid for the two tickets and the €200 plus fees the new buyer paid for the same two tickets. “Ticketmaster refuse to deal with any of my queries.”

Another reader, Fergal MacAlister, decided to request a refund for two concerts he had booked with Ticketmaster as a result of Covid-19. “I have to say the service was very good and the money arrived in our account this morning,” he writes.

“However, they did not refund the service charge portion. This is not much (about €14) but are they entitled to do this?”

We got in touch with Ticketmaster and received the following statement: “We pride ourselves on providing fans with a simple and transparent experience and are disappointed that this wasn’t the case here for Mr Mee and Mr Carney, both have been refunded in full.”

It also added that Mr MacAlister “actually purchased his tickets in a retail outlet that has since permanently closed. So those service charges were not ours to refund, but as a gesture of goodwill we have covered this cost”.