John FitzGerald: A firm opening a branch in NI would be able to service Britain and the EU 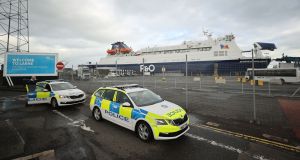 The port of Larne. The UK will progressively impose customs and other checks on exports to Brittain over the next few months. Photograph: Liam McBurney/PA

The downsides of the Northern Ireland protocol became obvious at the start of this year, even if they should have been clear before then. However, the political fall out is disguising the opportunities that this unusual situation also presents for Northern Ireland.

In chafing under the protocol, the major parties are ignoring how they might exploit the real opening that is there to benefit the Northern economy through its unique dual access to both the British and the EU markets.

In a recent publication, Sinn Féin make a similar argument to the DUP’s, that even with the protocol in place there is significant disruption to the large volume of trade between Northern Ireland and GB. However, unlike the DUP, they recognise that the true cause of this disruption is Brexit.

There is much exaggeration of these problems by both sides. The DUP believe that the protocol is a disaster for the North and want to get rid of it. Sinn Féin argue that, because it cuts significant links between the Northern economy and Britain, it will mean that the further disruption to British trade from Irish unity would be greatly reduced.

However, for most businesses operating in Northern Ireland who source goods in Britain, the temporary difficulties will be overcome. For example, if a manufacturer is importing chemicals from Britain, once they crack the paperwork with the first delivery, further compliance will be cheaper.

There is a real problem with the retail sector, whose problems have been heightened by the failure of some UK-based firms to make adequate preparations.

However, the new controls on the Irish Sea border do make it difficult to supply shops in Northern Ireland from warehouses in Britain. Some of these problems should be overcome if common sense is applied by the EU and the UK.

However, even with such goodwill, for some purposes the distribution sector in Northern Ireland may have to evolve into an all-island distribution system, with somewhat higher costs than in the past.

The potential upside of the deal for Northern Ireland is apparent every day as British newspapers carry stories of the difficulties for many small British manufacturers in supplying the EU market. Many of the stories are about how these firms are having to open subsidiaries in France or Germany to continue to supply their customers.

Establishing subsidiaries in a new country is expensive, requiring the registration of a new legal company, complying with foreign regulations, and tax rules. However, if they .opened a branch in Northern Ireland, they would face none of these costs and would be able to simultaneously supply all their customers in both Britain and the EU

The problem is that nobody in Northern Ireland is selling this option. To persuade a small firm in Colchester, supplying parts to the car industry in Britain and the EU, that the North is the answer, they will need to be convinced that the protocol is a permanent fixture. The DUP would find such a sales pitch difficult.

Also, though Republicans may find it less difficult to persuade potential investors that the protocol is permanent, this might also require toning down rhetoric on a united Ireland.

All of this makes it very complicated for the officials selling Northern Ireland. While they can lift the phone every morning and try and unobtrusively sell relocation to the North to businesses in Britain, any public statements advertising the benefits of moving to the North will not go down well in Northern Ireland. It might also irritate English politicians and it would, understandably, infuriate the Scottish administration.

While the upside of the protocol may be a difficult sale for some Northern politicians, businesses will eventually discover these opportunities, providing significant offset for losses in the distribution sector.

The UK will progressively impose customs and other checks on exports to Brittain over the next few months. This will make life much more difficult for Irish exporters, especially food exporters, who have had it relatively easy so far. However, it remains to be seen just how onerous and time consuming this will be.

If there were no controls on exports from the North to Britain, then the current relatively free flow of Irish goods through the North into Britain would continue.

However, if there are controls, which are meant to only apply to goods from the Republic, this could give rise to some firms moving stages in their production process to the North. This might mean shifting production from Monaghan or Cavan to Larne or Lisburn, making the goods fully UK produce.