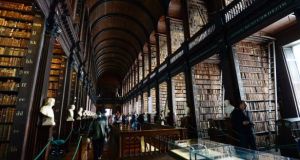 Trinity College Dublin (TCD) will examine its colonial legacy in Ireland and across the British Empire in response to the Black Lives Matter movement.

The university will employ a postdoctoral research fellow to examine the university’s history from its foundation in 1592 to the present day.

Trinity was for centuries a bastion of British rule in Ireland and the university for the Protestant ascendency.

It remained a Protestant dominated university until the lifting of the notorious ban on Catholics attending it without permission from their local bishop. The ban had been put in place by the Catholic hierarchy in 1871 and was only lifted in 1970.

Provost Dr Prendergast said the project has been the subject of much deliberation within the university as a result of the Black Lives Matter movement.

“We are conscious that we, as one of the world’s oldest universities, have a particular responsibility to study our past, and to reflect the impact of Trinity as an institution on the lives of people, both positive and negative,” he said.

Dr Patrick Walsh, a lecturer in history at the university, said the research will concentrate on the “double-colonialism” in Trinity’s history in Ireland and overseas.

During the 19th century some scholars treated Irish peasants in much the same way as they racially profiled “natives” in countries ruled by Britain, he stated.

Trinity had benefited from the plantations of the 17th century and at one stage owned 195,000 acres mostly along with the western seaboard which was given to it as an endowment.

The university began to examine its links to the slave trade last summer during the Black Lives Matter protests when it became apparent that one of its most famous figures, the philosopher George Berkeley, who gives his name to the library in the university, was a slave-owner.

Dr Walsh said during the 19th century the university was orientated towards producing functionaries for the British Empire.

He stressed Trinity’s legacy was complex as there were figures within the university such as Edmund Burke who produced critiques of slavery.

Trinity students, most notably Wolfe Tone and Robert Emmet, were involved in the nationalist movement in Ireland.

Dr Walsh said the purpose of the study is not to blame, but to understand the university’s past.

“We want to understand better where we have come from and make it clearer in a public manner. Trinity’s position in Irish society has often caricatured,” he said.

The examination will look, not just at slavery but also Trinity’s historical and intellectual connections to empire particularly, but not exclusively, in the Atlantic World.

At the same time Trinity was redeveloping its curriculum to meet the demands of the British empire and it by the mid nineteenth century it had evolved into an exporter of colonial ideologies and servants.

Connections have been established between College departments and imperial activities in India, Africa and East Asia involving current and former departments ranging from anatomy to zoology.

An advisory board will oversee the work led by the former President of Ireland and Trinity chancellor Mary McAleese.