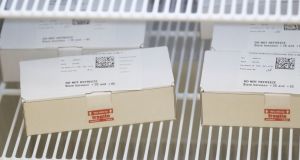 The BioNTech/Pfizer Covid-19 vaccine no longer needs to be kept at ultra-low temperatures colder than the Antarctic winter, according to new results that will allow distribution to be dramatically expanded to doctors’ clinics, pharmacies and more remote regions.

Stability data, which the companies have submitted to the US regulator, show the shot can be kept at normal medical freezer temperatures of minus 15 degrees to minus 25 degrees for up to two weeks, compared with the previous required storage conditions of between minus 60 degrees and minus 80 degrees.

Ugur Sahin, BioNTech’s chief executive, said the ability to store the vaccine at higher temperatures would give vaccination centres “greater flexibility”, adding that the company continues to develop new formulations to make the jab “even easier to transport and use”.

The change is based on data submitted by Pfizer/BioNTech to the US regulator, the Food and Drug Administration, a Health Service Executive spokeswoman pointed out.

“Until there is an update to the product licence in Europe this cannot be incorporated into any programme changes in European countries,” she said.

“As always, we are in close liaison with the manufacturers and the Health Production Regulatory Authority (Irish regulator), and consider any changes to the Covid-19 vaccine product licenses as they occur.”

In Ireland, the challenges around storing and transporting the vaccine has led to delays in administering doses to house-bound older people who are unable to get to GP centres.

BioNTech/Pfizer’s breakthrough vaccine was the first to win regulatory approval in the UK, US and EU last year, but the need to store and transport the shot below minus 60 degrees has complicated the rollout, particularly in remote areas without “cold-chain” infrastructure.

DHL, one of the logistics companies involved in shipping the shot, said earlier this month that governments had failed to prepare for “last mile” delivery, beyond specialist distribution and storage centres.

The new storage requirements should ease those constraints and make the vaccine more competitive. Moderna’s Covid-19 vaccine, based on similar messenger RNA technology, can already be kept at normal refrigerator temperatures of between 2 degrees and 8 degrees for 30 days, while another mRNA shot being developed by Germany’s CureVac can be kept at similar temperatures for three months.

The news came as an Israeli study, published in The Lancet on Friday, found that a single shot of the two-dose jab was 85 per cent effective in a further boost for BioNTech/Pfizer’s vaccine.

The study of 9,000 healthcare workers, conducted by Israel’s Sheba Medical Centre, a leading research hospital, found that a single dose reduced the number of people developing symptomatic Covid-19 by 85 per cent after a period of 15 to 28 days following inoculation.

Researchers also concluded that a single dose reduced asymptomatic infections by 75 per cent, suggesting that people are much less likely to contract and pass on Covid-19 once vaccinated with a single shot. Two doses taken three weeks apart were found to be 95 per cent effective in clinical trials.

BioNTech and Pfizer have said there is no evidence that spreading out the doses works. However, the UK has already been spreading out shots from both BioNTech/Pfizer and Oxford/AstraZeneca, giving the second doses 12 weeks after the first, as it tries to protect the population as quickly as possible. Other countries including Israel and the US have tried to stick more closely to the recommended three-week gap.

“This groundbreaking research supports the British government’s decision to begin inoculating its citizens with a single dose of the vaccine,” said Arnon Afek, deputy director-general of Sheba Medical Centre.

The Sheba Medical study follows a February analysis that showed a drop in case numbers and hospitalisations in Israel among vaccinated age groups, even though many had only received one shot.

It also builds on a lab study that found that 91 per cent of doctors and nurses had a strong antibody response three weeks after receiving their first shot.

Israel is leading the world in vaccinations after signing an agreement with Pfizer that allowed it to secure more doses by offering to study when they achieve herd immunity in the small country.

Gili Regev-Yochay, director of the Infection Prevention and Control Unit at Sheba Medical, said the vaccine was “amazingly effective”.

The advantage of studying healthcare workers is that they all follow the same testing procedures, she said, so the data are not distorted by who decides to get tested.

The study was dominated by a younger population, who are likely to have stronger immune responses, and it did not have data on how long the protection lasted because it only followed workers for the weeks until they got their second vaccination.

However, Regev-Yochay said she would assume the immune response would last for “a long time”.

“If it’s working so well in four weeks, then definitely, you can delay the second dose for a little longer.” – Copyright The Financial Times Limited 2021