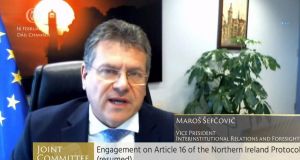 Commission vice-president Maros Sefcovic told an Oireachtas committee that “mistakes were made” last month when the commission included the Article 16 mechanism from the Brexit divorce deal’s Northern Ireland protocol in regulations to stop vaccines exports moving outside the EU.

The Slovak diplomat repeatedly sidestepped questions from TDs and senators on the Oireachtas EU affairs committee on who was responsible for including the politically sensitive Article 16 measure in the the EU’s draft regulations on vaccine supplies, that could have led to the creation of a hard border on the island of Ireland.

“It would be better not to engage any more in the blame game. I think I acknowledged that the mistake was made. We apologised for it,” Mr Sefcovic told Labour TD Brendan Howlin.

He told Mr Howlin that the mistake was “quickly, quickly corrected” after it was spotted.

Mr Sefcovic told the committee that the commission “deeply” regretted the mistake made in the draft regulations published late on Friday, January 29th.

The inclusion of the protocol’s Article 16 mechanism caused a political storm, increasing demands from Unionist politicians for the protocol and the trade border it creates between Britain and Northern Ireland to be scrapped and creating fresh tensions over post-Brexit arrangements.

During tense questioning by committee members, TDs and senators criticised the commission and expressed frustration over the commission vice-president’s refusal to answer questions about who had included the Article 16 measures in the draft regulations.

Fianna Fáil Senator Lisa Chambers said that it was a “colossal” mistake that has had “huge political implications for the island of Ireland, north and south.”

Mr Howlin said that “the harm done continues”, while Fianna Fáil TD Sean Haughey said that it had led to “sectarian tensions rising”.

Fine Gael Senator Regina Doherty described the error as a “rookie response” from a “peeved-off” commission acting emotionally over a row about vaccines. Green Party senator and foreign affairs spokesman Vincent P Martin called the error “a spectacular own goal” by the commission.

Sinn Féin TD John Brady said that it was a “huge error of judgment” that “need not have happened if the commission had taken the time to consult any of their Irish colleagues”.

Mr Sefcovic said the commission “learned its lesson” and was introducing a “clearing house with horizontal oversight” within the EU’s executive arm to ensure future issues concerning Northern Ireland are highlighted and parties are consulted before politically sensitive regulations relating to Ireland and Northern Ireland are published.

He told the committee the EU’s intention was to create more transparency around vaccine exports and to know where vaccines were being manufactured and where they were being sent.

The measures were introduced in the wake of a row between the EU Commission and pharmaceutical giant AstraZeneca over the failure to deliver promised Covid-19 vaccines.

“The mistake was made, we apologise for it and therefore we are introducing all these internal controls – the clearing house and the horizontal oversight of our activities – that we will not make such a mistake in the future,” said the commission’s vice president for inter-institutional relations.

He explained to the TD and senators that the EU was “under enormous pressure” to secure its “fair share of vaccines” when the draft export controls were published but that the measure was “never activated”.

The commission withdrew the measure from the draft within “a matter of three hours” after Taoiseach Micheál Martin and Minister for Foreign Affairs Simon Coveney contacted the commission president Ursula Von Der Leyen and Mr Sefcovic.

Fianna Fáil TD Dara Calleary told Mr Sefcovic that he was “splitting hairs” by saying that the Article 16 mechanism was not activated because this only happened because of the intervention by Mr Martin and Mr Coveney.

He called for a formal and “permanent mechanism” within the commission that could withstand changes in personnel where the use of Article 16 could be discussed in advance by the commission with the Irish government and the Northern Ireland Executive.

Fine Gael TD Joe McHugh, chairman of the Oireachtas committee, said Mr Sefcovic’s appearance was “an opportunity missed” to have more transparency, accountability and consequences around who prepared the draft regulations to include the Article 16 measure.

“There still was damage done . . . and we are still living with those consequences,” he said.