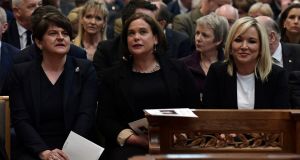 Father Martin McGill’s words to the politicians gathered in front of him, including Sinn Féin’s Mary Lou McDonald and the Democratic Unionist Party’s Arlene Foster, in St Anne’s Cathedral in Belfast have gone around the world.

They were a clarion call in the wake of the brutal killing of 29-year-old journalist, Lyra McKee, provoking spontaneous applause and a standing ovation from the congregation including, awkwardly, the politicians.

The absence of a functioning Stormont government in Northern Ireland has contributed to polarisation and diminished community relations, but the actions of the New IRA are not a consequence of the political vacuum.

Nor is the escalation of activity by the New IRA a consequence of Brexit, as it made clear after a bombing attack in Derry in January, which could have killed and maimed.

Then, the New IRA declared that all the talk of “hard” or “soft” borders had, or will have no bearing on their actions. Instead, they intend to pursue the traditional republican campaign for unity and independence.

However, Brexit and Northern Ireland’s political vacuum are seen as opportunities to be exploited by republican groups who have described the collapse of Stormont as evidence that Northern Ireland is a failed state.

Significantly, the New IRA rejects being called the New IRA. Instead the organisation simply refers to itself as the IRA, insisting that it is anything but new. Equally, they bridle at being called dissidents.

Rather, the organisation is keen to stress the continuity of the republican armed campaign, drawing its lineage like other republican groups back to 1916 and 1798.

The New IRA has been more active than people may realise. From March 2018 until February of this year, it tried to carry out 15 bombings and 37 shootings, and killed two prison officers.

In turn, the Police Service of Northern Ireland seized 45 of its weapons, 1.3kg of its explosive cache, and 3,333 rounds of ammunition in a number of operations.

Though numerically small, it has support in Derry, parts of Belfast, Strabane and north Armagh, though, together with other groups, it commands a minority of support amongst nationalists.

Saoradh, seen as the New IRA’s political arm, does not contest elections. During elections in 2016, it urged people to “vote with their feet” and stay at home, arguing that voting confers legitimacy on partition, north, or south.

On Easter Saturday, Ardoyne’s Dee Fennell, who gave the Saoradh address at their Dublin commemoration, said Belfast IRA member, Tom Williams, executed in Belfast in 1942, “didn’t have electoral strength behind him”.

Similarly, Nathan Hastings, a former Saoradh prisoner in Maghaberry, has insisted that his “legitimacy comes from the illegitimacy of the British occupation in Ireland”.

“As long as the British occupy Ireland there will be men and women who will resist them. It doesn’t matter what I think. This will be the case,” said Hastings, who was given 10 years for trying to ship arms across the Border.

Collectively, dissidents, even though they reject the term, are united around the right to Irish sovereignty. However, they encompass a wide spectrum of opinion and are divided tactically on how that right should be exercised.

Some unreservedly support violence. Others are strongly opposed. Some do not support any of the armed groups that currently exist. However, they unite in their view that Sinn Féin has gone in the wrong direction since the 1990s.

Prominent republican, Tommy McKearney says: “Sinn Féin has bought into the settlement. As it stands they are bound by the prevailing winds from London.

“Their economic strategy is merely the administration of, at best, the tinkering with the decisions of London,” said McKearney, who argues that Sinn Féin has moved away from its traditional republican base.

The killing of McKee provoked widespread condemnation and revulsion across the island, and beyond; but it did so, too, amongst prominent “dissident” republicans, including Councillor Gary Donnelly in Derry.

The Omagh bombing which killed 29 people in 1998 was carried out by the Real IRA. After the bombing the Real IRA, and its political wing the 32 County Sovereignty Movement (32CSM) never fully recovered.

The honorary president of the 32CSM Phil O’Donoghue stated “that it was the first time I ever considered quitting”. The level of revulsion over McKee’s killing is so deep that it remains to be seen if Saoradh will sustain.

There was also widespread condemnation, including within republican circles, of the Saoradh statement on the killing which described it as an accident while a republican volunteer was firing at the police.

Saoradh cancelled its planned commemoration in Derry on Easter Monday, but it went ahead with its one in Dublin, with 200 people attending. Despite the revulsion, it is probable that the New IRA will continue with its campaign.

If you stand at republican commemorations held by Saoradh, 32CSM, republican Sinn Féin or other groups throughout Ireland the traditional message articulated is one that could have been heard from Sinn Féin and the Provisional movement in the 1970s and 1980s.

Sinn Féin’s transformation into a constitutional nationalist party has led to “dissidents” arguing that it is Sinn Féin who have dissented from traditional republicanism, not the other way round.

Many “dissident” republicans are former members of Sinn Féin or the Provisional IRA. Many of those I interviewed for Unfinished Business were active in republicanism even before the Provisionals were founded in 1969.

A central point of contestation between the “Provisional” and “dissident” worlds is the raison d’être for the Provisional IRA campaign.

Danny Morrison, former director of publicity for Sinn Féin has stated: “To me our mandate was the sense of oppression, physically, that we lived under, the conditions that we lived under, and they – and they alone – justified armed struggle and that was our position. Not this other theological position which a lot of the older people were burdened with.”

However, the New IRA reject this argument, asserting that the Belfast Agreement and altered structural conditions within the state of Northern Ireland do not alter anything for ideologically motivated republicans.

Bernadette Sands-McKevitt, a founder member of the 32CSM and sister of hunger-striker Bobby Sands, famously stated that her brother “did not die for cross-border bodies with executive powers. He did not die for nationalists to be equal British citizens within the Northern Ireland state.”

Jim McCrystal, an independent republican in Lurgan, and a former PIRA prisoner, argues that a mandate exists for “as long as the Brits are here in your country”.

Belfast Republican Kevin Hannaway, a first cousin of Gerry Adams, argues: “The present leadership of Sinn Féin – if they were out for an Irish Republic,they failed. If they were out for civil rights, they got it in 1973. So what the f**king hell was the other 30 years of war for?”