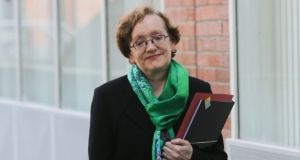 The Court of Appeal, in a three-judge decision written by Ms Justice Máire Whelan, pictured, upheld the decision that the teenager should remain in special care.

A highly disturbed teenager, whose parents were allegedly involved in a sado-masochistic relationship, has failed in an appeal against an order that she should continue to be held in special care.

The courts were told that the teenager was exposed to “extreme depravity and domestic violence” from an early age, with her mother describing the father as violent and controlling, according to a Court of Appeal judgment.

Reports suggested that the father prevented the child’s mother from breastfeeding her, subjected the child to physical and emotional abuse, and later recruited her to join in the abuse of the mother.

A ruling in the Court of Appeal upholding a decision in December by the High Court, was made on April 12th and posted on the website of the Courts Service on Thursday. The case has not been previously reported.

The Court of Appeal, in a three-judge decision written by Ms Justice Máire Whelan, upheld the decision of Ms Justice Mary Faherty that the teenager, known as G, should remain in special care.

The appeal against the High Court order was taken by G. Her mother, through counsel, expressed opposition to the care order being overturned. The High Court found that G posed a real and substantial threat to her own life.

G was taken into care in 2012 and has been in State care ever since. The special care order was sought because G had expressed an intention to take her own life when released from detention. In her appeal, G said these threats were not serious but were made with certain objectives in mind.

A risk assessment in 2017 by a child psychotherapist found that G, while a young child, may have had to attack her only source of comfort – her mother – in order to avoid being the direct target of her father’s abuse.

The mother left the family home, taking her child with her. G was the subject of a care order in 2012 following a violent attack on her mother.

In her early teens, G displayed extreme and excessively sexualised behaviour towards female care staff. Following an attack on a care worker, G was assessed but it was decided she did not have a mental illness.

During the attack, G tore the care worker’s eyelids and tore hair from her head. “G wrapped her legs around the victim’s head and chest, refusing to let go, and bit the care worker on the hand, continuing to pull at her hair and scrape her face.”

When interviewed afterwards by gardaí, G appeared to be annoyed she had not managed to kill the care worker, the court heard. She said it was “music to her ears to hear [the care worker] scream and cry”.

Reports said G had no friends and received no visits where she was held. A male member of staff said G perceived everyone she was in contact with as a potential attacker, and suffered “excruciating levels of anxiety”.

The child psychotherapist’s report said G had very little capacity for managing her own feelings “which means that anything which disturbs her internally, is projected out into her environment and then attacked”.