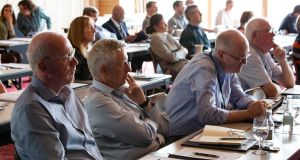 The Minister for Health Simon Harris is expected on Saturday to promise a new process to tackle the pay gap between medical consultants taken on since 2012 and more longer serving colleagues.

The Minister is expected to tell the annual conference of the Irish Medical Organisation (IMO) in Killarney that he wants to work with the doctors’ trade union on dealing with this issue.

Medical organisations argue that the pay gap, which in some cases can reach up to €50,000 a year, is contributing to the inability of public hospitals to fill about 500 consultant positions.

Mr Harris is expected to tell the conference that the Government is committed to increasing the number of consultants working in public hospitals.

The Minister is likely to point to the announcement by the Government earlier this week that “full consideration” will be given to dealing with outstanding issues in relation to ending the existing two-tier pay arrangements in the public service, either in talks on a successor to the current public service pay accord or in any other review mechanism put in place in the interim.

It is understood that Mr Harris will say that the existing pay gap will have to be at the centre of the proposed engagement on tackling the two-tier pay system.

The Minister is also expected to maintain that he wants talks on the twin issues of pay and consultant status.

However, he is likely to say that there will also have to be new efforts made on “significant structural and organisational reforms”.

The IMO is likely to watch carefully to see whether the Minister envisages a standalone process for dealing with the lower pay arrangements for consultants appointed since October 2012 (when salaries for new entrants were cut by 30 per cent), or whether the Government wants the two-tier pay issue addressed in a process involving the entire public service.

The IMO warned on Thursday that such a cross-public-service approach to dealing with lower pay arrangements for consultants appointed in recent years would be a “non-runner”.

He said this had been acknowledged by the Public Service Pay Commission in a report last autumn.

Meanwhile, the Minister for Public Expenditure Paschal Donohoe said on Friday he would give consideration to the issue of financial penalties applied to second-level teachers who are members of the Association of Secondary Teachers Ireland (ASTI) after they engaged in industrial action nearly three years ago.

Earlier this week the Minister for Education Joe McHugh said ASTI members had lost out on about €15 million on foot of the penalties – mainly delays in the payment of increments – which were imposed by the Government under financial emergency legislation.

The penalties have come back into focus after the Government decided not to apply similar sanctions on nurses after they went on strike earlier this year.

The ASTI is considering suing the Government over the issue.

On Friday Mr Donohoe said: “There is an issue there I need to and am considering in relation to how we respond back to it. I know the ASTI has made some comments about what it is intending to do in relation to it and there have been many comments made across this week and in the coming days at different conferences. I’ll be giving the matter consideration in the coming period.

“I have legal advice that said what I did at that point, [I] had the power under legislation to do, but I am aware of all the different commentary in relation to that. I know the ASTI is indicating it may take action. I will give the matter consideration but I am not going to make an announcement in relation to it today.”