Taxing pandemic payment ‘could be unconstitutional’ 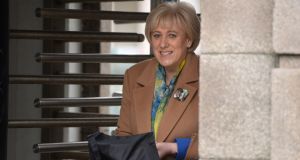 Minister for Social Protection Heather Humphreys: it has always been clear the payment would be treated as income by Revenue. File photograph: Dara Mac Donaill

Retrospectively taxing the pandemic unemployment payment (PUP) could be unconstitutional, a legal advice body has warned.

The Free Legal Advice Centre (FLAC) has accused Minister for Social Protection Heather Humphreys of providing “contradictory and confusing” messaging when explaining how the payment will be taxed.

FLAC chief executive Eilis Barry said the organisation has “repeatedly outlined its concerns as to the fairness and constitutionality of the retrospective nature of this piece of legislation”.

Ms Barry urged the Government to seek “immediate advice” on the centre’s concerns and advised it to “take heed of the stress and confusion that has been caused to date”.

The criticism from FLAC follows assertions from Ms Humphreys that it has always been clear the payment would be treated as income by Revenue, similar to jobseeker’s allowance.

“Jobseeker’s is liable for income tax if you earn over a certain amount,” she told RTÉ’s News at One on Monday.

The Minister said any tax on the PUP would be spread out over four years and would amount to €1.50 per week and that more people were due a refund than would pay tax. The average amount of tax outstanding is €350.

However, Ms Barry, said the Minister’s comments are incorrect as the jobseeker’s allowance is means-tested and not subject to tax. She said the pandemic payment was only made subject to income tax through the enactment of section three of the Finance Act 2020, which also provided that tax could be backdated to claims from March 13th.

Christopher Bowes, legal officer at FLAC, said PUP claimants were entitled to rely on official information and could not have been aware initially that the payment would be taxed.